shouldn't that be female dog? You don't have to be pregnant to be a b#tch but I suppose it's possible. I'll stick to the Aussie slang as it doesn't seem to be recognised as offensive by the auto-correct. So it was a bugger of a system.
Top


Time for a ride on the good old GTS


Forgot to answer Kev about soda , it's all successfully removed off paintwork, polished ali, cast surfaces, everything on bikes that are together after a LOT of elbow grease and time but I reckon I'm going to pay the price on all the millions of bits and peices, bolts, nuts, etc, etc that got a dusting too as time goes by. I've been around a few times with WD-40 spraying everything. At least the Spagjet is my shiny friend again after a BIG birthday that admittedly it was due for anyway after the last 6 months Darmah spoiling, time for a blat to clear it's cobwebs and mine and think about the fact the exhaust seal nightmare is over and the Darmah heads are together and turn over just beautiful.

* The only information I can find is from one of Ian Falloon's books where it is stated that the new seal was "OR 1000760". Unfortunately, this reference doesn't correspond to anything I can find.

Yes I know it is one hell of thread resurrection, 5 + years old

, but I've been having similar troubles with leaking exhaust valve guides. In my interminable research the Athena web site seems to think the 0799.92.395 seal is 1.78 x 8.73 & a TP108, see http://www.athenaparts.com/eng/products ... on70-tp108. Which perhaps indicates its the cylinder head seal

This doesn't however help me... it looks like the exhaust guides were replaced in thdoe 80s with ones that used the 'top hat' seals. Unfortunately both the green & black ones leak and the white viton ones don't grip the guide well enough to hold on to the guide lip for even one cycle.

I'm going to try seals for the later monsters which have a little spring around the top although they may prove to be too tall and the closing rocker will rip 'em out. The rockers have being chamfered.

If I had to pick the single most frustrating and relative time consuming PITA job on my MHR overhaul last year, it was getting the old, valve guide seal O rings out and the new ones in. Once in, the valve stems would not pass the O ring. I lubed and softened everything on the head and stuck the valves in the freezer and even then the valve stems were a really tight fit to get past the O rings. Once in place the valves moved freely. I also discovered that the new green and black guide end seals did not stay in place as there was nothing to lock them on the end of the guides. Note comments in this thread about the underside of the closing rockers being ground to prevent contact with the end seals.

I recall that eventually, the black end ones staying in place but having to give up with the green ones; they moved loose every time the valve closed. Dumb design.

It's good to rehash this stuff; always someone else finding out this for the first time.
Top

Much of the issue here is the multitude of different guides, some after market, and seals which often share the same part numbers. I have two different types of guides/seals in the heads with the exhausts having just the top hat and the inlets just the o rings. The exhaust closing rockers had been ground correctly.

I replaced the o ring in the inlets when I had the heads off and, yes, they were fiddly but not a complete pain. I could mount the heads on a temporary frame that allowed me to do the work inside the house which probably made it much easier.

The exhausts were fitted with "top hats" that had hardened off so they were replaced. The guide did have an internal groove but I can't honestly remember if there was also an o ring fitted. I do remember trying to fit an o ring but hit the same issue of it being too big.

I have already tried three different top hats, a white viton one didn't even make final assembly as it wouldn't hold on the guides. The grooves they fit around aren't as well defined as they could be with a chamfer rather than a definitive step. Both the black & green ones held onto the guide but didn't take long to start leaking, usually when the engine got hot enough. It appears these are for the belt drive models and have the following part nos of 76410091A & 76410131A respectively.

I'm now going to try another top hat seal which has part number 0603.92.150 and hope it doesn't end up been the same as the above viton seal. It's a bit of a grainy photo, Mdina Italia, but does look to have a similar off white colour as to the ones I took out.

BTW I'm seeing oil on the rear exhaust thread/collar with oil in the port when I take the header off. I'm assuming it's only the exhaust seal that's leaking because there's no misfire and only a little oily wetness on the spark plug. 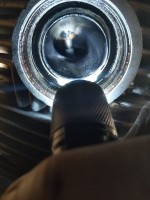 Does this look like a guide leak? From either the stem or guide/head? You can just about see some oil on the end of the guide.

I am also seeing oil around the spark plug thread and when peering through I can see quite a heavy(ish) film of oil on the bore. So am I on the wrong track and it's rings?

Can oil seep into the bore via the head/barrel junction?

BTW I have fitted an uprated oil pump. And here's the front exhaust - massive contrast with the camera light but it does better show the shadow in the lee side of the guide where the oil residue hasn't settled. You can also see the deposit on the guide.
Top

And I'm gonna have to change the o rings in the inlet guides as I whipped of the rear carb and there was a guilty little puddle of oil in the manifold. Harrumph! I already ordered some BS011 Viton o rings so heads off again...