Please say HELLO and tell us about yourself, your bike[s] and where you are located etc...
Post Reply
2 posts • Page 1 of 1

Hello & Thank you for letting me join the Club. I recently discovered skeletal remains of the C&J Racing framed, built to Ron wood spec's 750 Duc flattracker. It was in Bisbee, Az. The bike was heavily parted out after it left the track after David Aldana number 13, Rex Barrett & Rob Morrison raced it at Ascot & Corona. I'm currently in the hunt for any additional photos of it outside the 3 that I already have. One is of Aldana at speed -turn 3 at Ascot in '72. Another is with Rex Barrett's 21x plates on it in the pits @ Ascot in '73, and the last is of when Ron Wood was almost finished with it in late '71 when it was resting against his fabrication shop wall.

Hi Clyde - it would be a good idea to post some pix of your bike... I'll start with this one right here. 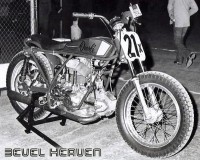