Please say HELLO and tell us about yourself, your bike[s] and where you are located etc...
Post Reply
12 posts • Page 1 of 1

Hi everyone, looking for help to confirm ID of whatI believe is a 1965 Mach 1 250.I live in Kelowna, BC Canada.The history of the bike from what I gathered is the bike was raced(big surprise right) making it a bit of a challenge to confirm everything. Here’s what I know -
Frame Suffix - IGM 1985OM (frame paint factory red)
Frame # 102948
Motor #14978(missing motor prefix from other side crank)
Sadly all original steel parts were missing and replaced with fiber glass and plastic

I was only able to add three pics but have more.
The fork yoke has the bridge clamp for upright bars which I know was a ‘comfort option’ with a different seat. Did Ducati just sell tha yoke with the clip ons? Also the clutch lever perch looks like a factory welded piece to the bar and the front brake lever perch clearly was ground off and a bolt on added. The tach was a CEV but if this was a 1967 did they have tacos or just the speedo in the headlight assembly?
The center stand doesn’t match the ones I’ve seen on other 65’s either
Still haven’t figured out what motor is sitting in this frame?
Thanks a bunch guys! Glad to be here and feel real lucky to have found this bike after I sold my 2001Ducati Monster 750 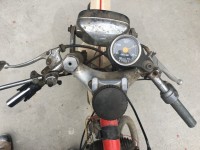 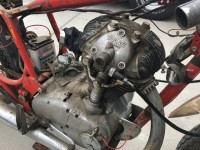 Its a later frame and engine A widecase with probably the correct stand for that model. No matter still a desirable little bike with hopefully a bit more reliability than the Mach 1.
Top

Both engine and frame are wide-case. But interesting because ...

engine is from another bike . it has the large M 30 alternator outlet . early widecase had M 22 outlets . on the plus side those crankcases are stronger and have the bigger 6306 righthand main bearing

Good one, Eldert - thanks! 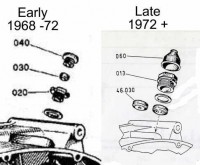 Awesome info thanks guys. I was stripping more paint on the frame today and found a faintly stamped 350GT in front of the frame number. Hopefully this will help narrow it down further. I was just comparing numbers from the compiled list of singles on this sight and came up with a 1972 as the year. Yes the numbers on the engine are correct and those ones seemed to suggest a 1973 motor. Does this add up or am I way off?
Top

So thoughts are it is a Mark 3 but the red frame paint has me confused as everything I’ve read indicates that would make it an earlier model and not like the later model black frames. Now that I’ve found the GT designation on the frame perhaps that helps? It amazes me how much of a challenge it seems to be to pin down year and model of these beautiful old Ducati’s
Top

I have found no reference in any of the published sources to this "350GT" frame stamp*. However, I see there are 2 registrations (ref. 1025 & 1031) of bikes with it on the BevelHeaven/Robert Miller site. So it existed

Unfortunately, both the BevelHeaven/Robert Miller registrations are undated, and neither gives the model of bike concerned. (It's a crying shame that more care isn't taken when these data are acquired. But there you go ...).

So still a bit of a mystery, especially given that your engine number, and those of the other 2 bikes, appear to be later (see below).

- Does the paint appear to be original or has it been over-sprayed on to black?

- Can you perhaps post a picture of the stamp?

* '250GT' was definitely stamped in front of the frame number on the smaller capacity bikes.

- How many fins does the barrel have?
Top

Getting there guys! Thank you so much for the shared info - pretty soon I’ll actually be able to source parts, or at least start trying. Here’s the best photo I could get of the head stamp. And I’ll need some clarification of where Iam counting fins

The paint I believe is original red the only thing that had me double guessing that was two wraps of electrical tape that came off the main down tube and was black underneath but after stripping the paint there was no other sign of black anywhere! 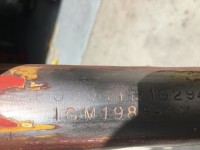 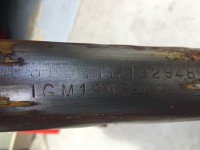 Here’s what strikes me tho. Clearly an effort has been made by a previous owner to conceal the fact this is a 350 bike. The motor prefix as mentioned on the crankcase obviously ground and the head stamp 350GT has the same feel to it as well. If the bike was being raced as a 250 there would have been a rather unsporting advantage to this. It is entirely possiable that the frame had been stripped and repainted and could have been black at one point in its life....
Top