Let the blabber fest begin... This area is for all topics that don't fit into one of the forum catagories & not specifically related to Ducati or even moto related for that matter. Talk away - but keep it clean and "work safe" people. Any offensive posts will be deleted at the descretion of the admins.
Post Reply
8 posts • Page 1 of 1

How many of these bevel engined road/race bikes were made? Who out there has one? Do they handle as good as people say?
Top

Riv,
Craig here,yes owned one with a very quick Leigh Farrel 1000 Mille in it,bloody good thing.You should be able to pick up a chassis for not a lot,complete they seem to go around 8k-15k depending on spec.An RV-1 rolling chassis just sold for 4k aud in Japan(not to me although i nearly bought it).RV-1 is Race Version as opposed to SV-1 Street version,the RV carries no Vee Two compliance plate,if you got a cheap RV I'm sure you could work out the rego,particulary if you painted it say MHR colors for the plod roadside rego check!!! A mate nearly bought a chassis recently,he didn't go ahead with it,let me know if you want it and I could probably put you in touch with the guy that has it.
Cheers Craig.
Top

Thanks Craig. Are the SV and RV the same geometry? Same other than the compliance plate? Give me a yell if you do hear of anything please.

Holy thread revival...
I have owned a Alchemy SV-1 since 1994 ish,
afaik the SV-1 and RV-1 had the same geometry with the RV-1 having a different sub frame to run the exhaust over the rear of the motor through the area the battery is normally located to increase lean angles.

The only mention I have seen of a SV-2 is a one off special made by Brook Henry, bevel bottom end with belt driven 60 degree pantah heads. It had slightly different bodywork.

As for handling they were very stable with much quicker steering due to the short wheel base and steeper rake, less trail
The Alchemy was offered as a replacement frame kit and with a budget build you used donor wheels (18") forks brakes etc. from any bevel drive Duke, however most owners like myself sourced USD forks and
17" wheels from a Jap bike, mine has wheels and forks from a GSXR750 J/H with a custom made variable offset triple clamps, so no two were exactly the same.
Mate of mine at the time who was a B grade racer got mine (no suspension set up and untuned) round Oran park a couple of seconds slower than his Yoshimura GSXR750 race bike.

I'm slowly bringing it back to life with modern ignition system, FCR carbys, surface treated pistons, valves, combustion chamber and any other modern touches I can afford.
Pic of mine after being in the shed for 10 years plus, the bodywork is a one off I designed and built which I'm currently re doing with vacuum infused carbon fibre
it's slightly wider at the tank base so your knee doesn't hit the shock, the rest of the bike is now spread around the shed in various stages of repair.

Hello Zanetti, this is the bike I am trying to get some history on. 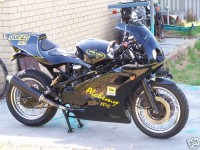 That is certainly unique, looks like the fuel tank is different from what came with the Alchemy kit as the filler location is further back towards the rider.
afaik there was only 100 SV2 frames made, don't know the number of RV1's
Brook Henry is back in business you should email him the frame# and a pic and see if he could shed any light on what you have.
http://www.veetwo.com.au/
There's also a thread over at ducati.org which has brought a few Alchemy owners together.
http://www.ducati.org/forums/australia/ ... -face.html
Top

Thanks Zanetti. This bike was advertised in Perth as an SV-2, I spoke to the owner who said it was a prototype built by Brook Henry in the late '90's and taken to Oz bike shows to keep interest in the Alchemy going. He also said he had a magazine article backing this up, but he could not produce the magazine when I viewed the bike. I did send Brook Henry a photo of the bike, he said he did make one SV-2 prototype which he still has and looks nothing like this bike. He said he thinks a Perth mob made the alternate bodywork sometime in the '90's and offered it to Vee Two, but Brook was not interested.

The compliance plate suggests it is SV-1 #3 and that it was complianced 7/98. Brook said that makes it one of seven pre-production kits he made, and that it may have been a long time in assembly, hence the 7/98 compliance. The bike appears to be a low spec SV-1 under the bodywork, I think the fuel tank is original SV-1, (I will post a photo when I get a chance). It has an '81 Darmah engine with 32mm Delortos, 38mm Mazocchi front end, 08 Brembos and nice Akronts laced to Ducati bevel hubs.

I bought the bike in the end as a SV-1, I believe I can get SV-1 bodywork from Brook for around $1500, (I like the SV-2 bodywork anyway). The bike also came with used racing bodywork (similar style to the photo) which suggests it was raced at some stage, although there is no evidence of this on axle/clipon/footpeg ends etc, and it is very low spec for a racer. I also got an unused additional set of road bodywork.
'82 SS 900
'82 MHR
'80 SD
'79 SSD
'91 Alchemy SV-2
Top
Post Reply
8 posts • Page 1 of 1