My spark plug on the horizontal cylinder was fouling a bit on my relatively new to me 750GT. I pulled the heads and cylinders and found a couple of things. Oddly the second ring on the horizontal cylinder was sticking in the land a bit forward of the wrist pin boss. The ring also has a chip out of it at the gap. The rig does not want to slide through at this point but I don't see any obvious deformation to cause this. The bike has 18,000 miles and the pistons and cylinders look great and are well within spec with a clearance of 0.06mm. I'm going to try new rings and see if I can open up the land in the tight spot with some light sanding or filing with an ignition file maybe?

I measured the valve guides and clearances are between 0.05 and 0.09mm which is within spec. However the horizontal intake guide is worn to 0.37mm, well beyond the wear limit of 0.10mm per the Falloon restoration guide.

I'm thinking I might as well have the heads redone. I think I could replace the single guide but not having done it before and not having proper drifts I don't want to bugger it up. I think I would just as well have someone skilled go through the heads and freshen them up. I know of Syd's Cycles and thinking of sending them across the country but I'm skittish about them getting lost in transit.

Does anyone have recommendations on somewhere in the Seattle area or the pacific northwest? Any other suggestions or comments would be appreciated. 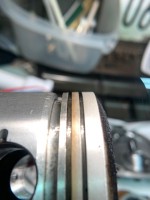 Hi,
In Portland OR there is Baisley Performance , Dan Baisley. 503-289-1251 . He did the head on my 850 Commando and did a superb job. He is a craftsman and a perfectionist. Not cheap but I would easily trust him with my bevelheads . He is also a very sweet human being.
Cheers,
Kara
Top