Post pictures of your twin cylinder Bevel Drive Ducati (pre-1985) along with a description here.
Post Reply
2 posts • Page 1 of 1 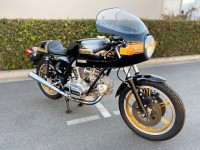 I found this bike hiding in a living room in So Cal where it had been sitting for over 35 years. 2859 miles were ever ridden on it - such a shame. Well it is outside under the blue California sky once again. I did a few things to tidy it up; rebuilt the Dell'Ortos, new intake manifold insulators, got the brakes working, all electrical working, a bunch of hours getting 35 years of dirt and grime off the motor and bodywork etc... I have the original airboxes and snorkels in a box - there were crappy plastic stacks on the carbs so I put on a pair of spun aluminum Malossi trumpets, new taps and cavis benz hose, new spring clamps, de rusted the inside of the tank etc. Will put a FOR SALE advert together eventually but it's ready to sell now so if you are interested call or email. thanks.

this bike has been sold