In trying to alleviate the load on the somewhat anemic alternator, I purchased an LED lamp from Autobaba, which was supposed to be a replacement for the 6014 unit in my bike; big mistake: the unit would not fit into the capture rings in the headlamp shell. It was slightly too big in diameter. Also, the protuberances on the backside interfere with the backside capture ring. And then, the unit must be used with a "Decoder" that smooths the current, otherwise,the lamp would flicker, since a diode is much more sensitive to the pulsating DC that comes from an alternator.

The LED draw was:

The LED unit from Autobaba did not draw much less than the original lamp, so inmy opinion, it is not worth the investment. 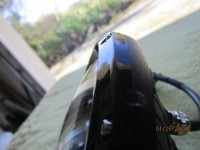 But did it improve riding in the dark ?
I have the impression that 2 ordinary 6€ LED flashlights give me more light then the H4 in my 600SS.
The last 3 miles are on a non-lit road with trees (and dropping branches).
I don't really need more light (a few weeks before retirement) and I don't like touring in the dark in The Alps, but when necessary I like to see where I'm going.

This was a bench test, a sensible precursor to a road test.
So, your question of it improving the lighting riding in the dark is not something that I can answer from a bench test.
Top