I'd like advice from the group. My 1982 900S2 has sat around for some years, and today when I tried to start it, on turning on the fuel, it poured out of the RHS carby. It had a pair of brand-new Dell Ortos about 2 yrs ago, hardly run since. Turned out the float was half full of petrol. I put in a float from one fo the old carbies (looked fine), still flooded petrol on the floor. If I take the float bowl off and hold the float up manually, it seals fine.
What should I do next? Thanks.
Top

I strongly suggest removing the carb, you can leave the slider and top hanging in the bike, take the bowl off and turn the thing upside down on a table top and measure the float height as described in the manual. It's really easy to adjust with the carb on a table in front of you. It is possible that you have a lump of varnish plugging something and causing the float to stick. 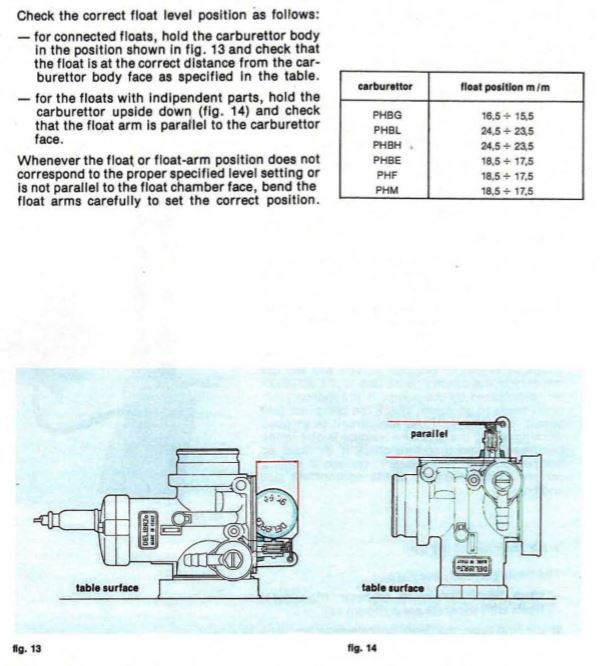 ... and install as per the instructions above.

A wise man would do this with both carbs.

You might also consider buying one of Steve's float height gauges. Or make your own. P.s Can't find these in his on-line shop; so best ask.

The reason for the failure is that the tips of the float valves go hard with age/when not used. Given the length of the bike's lay-off, you should probably allow for a complete carb clean sometime in the not so distant future.
Top

And, I am out of stock on the float gauges but some vernier calipers will do the job well. Adjust float height to 18mm +/- 0.5mm

Always dangerous to make assumptions but as the bike had new carburetors only two years ago and has only been very lightly used, I didn't think it likely that the float valves would have aged and hardened. It's more likely that something is jammed in the carb fuel valve. The float full of fuel should never have happened, especially with a new carb but mistakes are made, even by Dellorto.

You could be right; but every spring I have to replace float valves in Dell'Orto carbs, float valves that have stopped sealing in less than 4 months of inactivity. And judging from reports on other forums, I'm far from being the only one.

That said, I get the impression that the phenomenon is becoming less of a problem than it was a few years back. It has been suggested that Dell'Orto have changed the material they use to make the valve tip. Dunno. Steve may know more than I.

I had trouble with my MHR Mille 1985.The front cylinder was flooded with fuel.
After some investigation I found out that the RH fueltap (The vaccum controlled fuel tap) was the problem.
The diaphragm (membrane) was leaking, so the fuel went through the vaccum hose (the one that goes to the inlet manifold.
I threw away the fueltaps and mounted the older fueltaps without the vaccumpipes.
Top

I recommend that anyone with a bike that has a vacuum tap to toss it, plug the vacuum port at the manifold and install a pair of mechanical fuel taps...

I fully agree.
And put on syncnipples that you can run with rubbercaps.
Top
Post Reply
9 posts • Page 1 of 1