I have taken my project bike apart and the frame is ready for sand blasting and powder coat...

BUT...I cant figure out how to get the rear brake foot lever to come lose...I have removed both pins and it's not coming free.

This has been the biggest PITA on my 160 so far. Hate to say it... but I ended up cutting off the post the cable went on so I could spin the lever around and pull it off.

Otherwise you need to push the pin out of the middle of the lever. Good luck. I tried using a puller but was only marginally successfu. I tried a punch and a heavy hammer but didn't get much further. Both of these were done along with liberal doses of penetrating oil (REAL penetrating oil. NOT WD40) Never tried heat, probably would have helped to get the lever's boss cherry red???

I came pretty close to building a tool specifically for pushing the pin out of the lever, but decide since I had no plans of using the stock lever again anyway, I just cut the post. I plan on using the post when I build some rearsets anyway.

To post images you need to have the image hosted on the net somewhere (there are a lot of image hosting services, I have my own website so I use that) and then put the link between [ img ] tags.

It would look something like this, using square brackets instead of the curly ones: 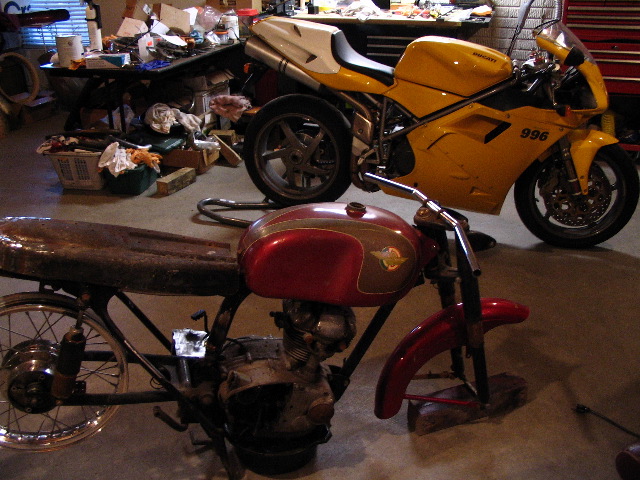 EDIT: You sent me a link with pictures I think... I can'f ind it now though??? So you already have the pictures hosted somewhere, which is half the battle. Now If I could remember where that e-mail is...must be on a another computer...
-Craig
Team YIKES! Motorsports
Top

Also, I found the e-mail with the links to your pictures. I don't think Yahoo allows "hotlinking", which means you can't host them at yahoo and show them somewhere else. So if you try it and it doesn't work, that's why.
-Craig
Team YIKES! Motorsports
Top
Post Reply
3 posts • Page 1 of 1