Getting back to roots...

Please say HELLO and tell us about yourself, your bike[s] and where you are located etc...
Post Reply
8 posts • Page 1 of 1

Getting back to roots...

Owned a few bikes ('04 Multi, '10 Monster and an '06 Paul Smart) and was presented with an unbelievable opportunity to own a round case.

Obviously in love with the air-cooled 2-valves, so why not go back to the beginning, eh?

My project bike is a (mostly) complete '74 GT. Read through a couple of books (one labeled a bible and the other a restoration guide) and I think I have a pretty good idea of what it should look like.

Deciding on what it is this thing should become.

Open to suggestions / comments from other 'project managers'... 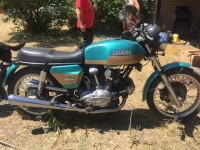 Welcome aboard, Shane. You gotta love these round case bevel drives. Looks fairly complete and should be an easy restoration for you.

From my perspective, since it is seemingly complete, Id suggest you do whatever you can to keep it in it's original configuration. Clean everything up, mechanically go through everything, paint it as per original and call it a day. When you get tired of it, someone will end up with a nice original looking round case.

That said, it's your bike. If you are going to make sweeping changes, I would still suggest that you don't do anything permanent... Anything removed, clean and store correctly in a box labeled with your bike's engine # etc. Keep note, and keep everything in 1 place.

Above all else, have fun with it.

Well, looks like a comparatively straight-forward project unlike the 750 GT basket that I started with. The saga on that one is here:

As to originality, as you can see I chose a "season to taste" approach since I planned to ride it a fair amount and hence felt that a number of reliability / rideability mods would be desirable. If you're going through the engine anyway then even though it will add significantly to the cost, in the long run, I'd maintain it's worth it. Also, the electrical system inc. switchgear, alternator, wiring is pretty marginal I think most would agree so there's considerable justifiable improvement there. I'd also recommend Racetech Gold Valves in the front forks and IKONs in the rear. Was never a fan of the original Marzocchis front or rear. Get rid of the points of course. The only things I can think of that I wish I'd done, but didn't is install an oil level sight glass since the dip stick is such a PITA to use. Also my engine cases had horrible porosity as it turned out so if I known that, I would have coated the inner cases with Glyptol and not have had to chase leaking voids.

Other good news is between, Steve / BH, Ducati Classics in NL, Bevel Rubber, Mdina Italia and Columbia Cycle in Nakusp BC, you can source all that you're likely to need.

Anyway, I love riding mine and it's a definitely a permanent member of "The Fleet".

BevHevSteve wrote: ↑Fri Aug 25, 2017 10:08 am From my perspective, since it is seemingly complete, I'd suggest you do whatever you can to keep it in it's original configuration. <snip>

Hi Shane and welcome to the Forum,

I'm with Steve on this. The bike looks relatively unmolested, and you can't 'back restore' originailty.

Thanks for the feedback!

I will be getting into the gritty bits this winter, and will (hopefully) remember to post pictures along the way.

Geodoc -> I read your rebuild with quite a bit of interest (twice). I am a regular at the DUCWC Rally in Nelson each summer, but I think this may allow me to ride with Wolfgang's crew. You ever get up to Nakusp...?

Steve -> I think you're right about not messing with a good thing.

Just noticed something ... my wheel stampings (Boranni) are on the right-side (rear) and the left side (front). Is this normal, or has some prior mechanic turned things around?
/Shane
Top

Yep, I know Wolfgang very well. I got a lot of stuff from him for Guzzis and the GT. Been to Nakusp many times (the road between Kaslo & New Denver is the best road in BC IMOH). I plan to make the Rocky Mountain Motogiro this Sept. 15-17, or at least the Sat. 'endurance run" part on either my Guzzi or GT.

I've never seen so many Motobi's in one place!


shanemcallister wrote: ↑Sat Aug 26, 2017 10:36 am
Geodoc -> I read your rebuild with quite a bit of interest (twice). I am a regular at the DUCWC Rally in Nelson each summer, but I think this may allow me to ride with Wolfgang's crew. You ever get up to Nakusp...?

The east side of Kootenay Lake down to Creston isn't bad either nor is the highway from Vernon to Nakusp.

Yes indeed, the road across the Monashee Pass that you refer to is pretty nice (Vernon > Needles ferry . Nakusp), though I've become a bit of a granny on that one since there seems to have been a rash of people center-punching deer on it over the last few years. Oddly on my #1 road - the North Cascades Hiwy I have never seen any deer at all or heard of anyone hitting one on a bike. Not their zone apparently. And in E Oregon, watch out for elk!

Maybe see you up there for the Giro, though probably on the Guzzi this year.

The east side of Kootenay Lake down to Creston isn't bad either nor is the highway from Vernon to Nakusp.