While rebuilding crash Darmah's engine I decided to use a variation of Kevin Brackens oil flow solution found in his excellent article - https://www.ducatimeccanica.com/kevin_race_engine.html and another oil flow idea from an unknown author found here - http://www.webgrafex.com/roundcase/duca ... tions.html After drilling the hole to drain the rear head onto the transmission I noticed the original drain slot that drained on top of the right side of the crankshaft. Kevin found that oil falling on the crankshaft creates unwanted drag. 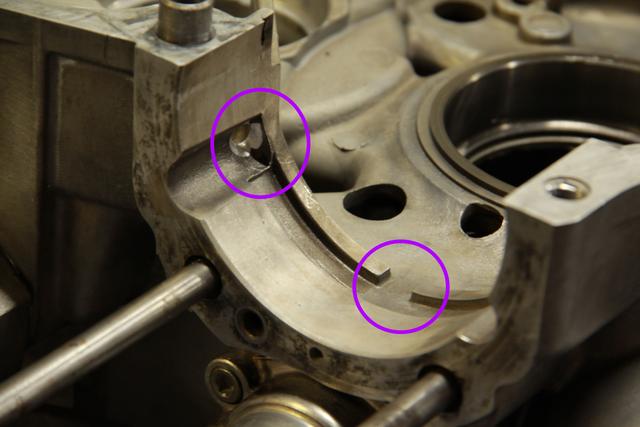 I welded up the stock drain and machined smooth and enlarged the drain hole a bit to accomodate both rear head drains. 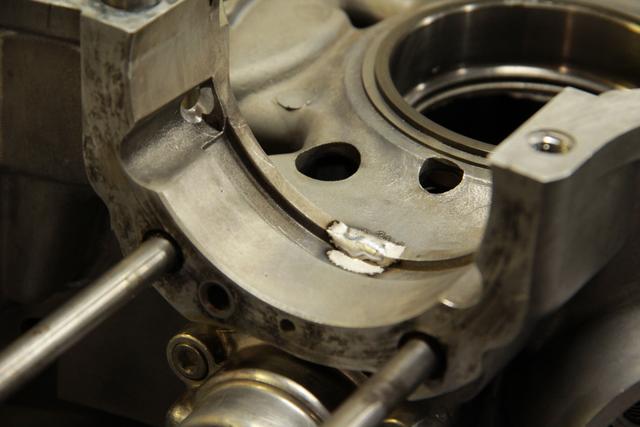 Also added drain holes under the transmission and crankshaft. There is a few thousandths clearance between the cylinder and crankcase bore so
some will still drain down on the crankshaft. 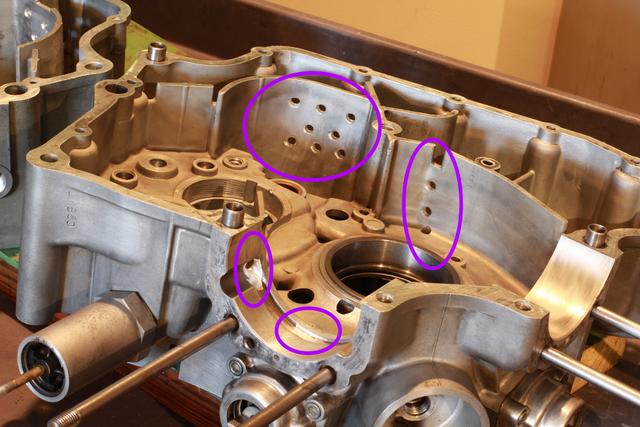 The drain for the front head was smoothed and radiused. I probably won't notice any difference, but it didn't take much time and kept me out of the tavern! Hopefully enough oil will be flying around for the main bearings. 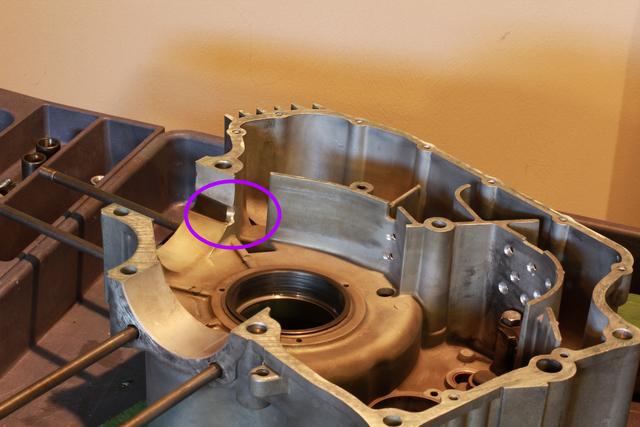 This engine has close to 300 miles on it in the last couple weeks and all good so far. There were a few more mods done to the oiling system than
just drain holes in the cases. When I took the original oil pump apart it looked as though it had been pumping gravel. Good condition pumps
or pump gear shafts are not very common so I thought I would make one. I bought a few used Ducati Monster oil pumps on eBay and found that
they are still using the same pump gears although the shafts are a bit different. The gears are also heat treated now, the originals were dead soft.
So, while doing this I realized now was the time to make a pump body with a fitting to pump direct to the filter and filter all of the oil.
Pump body made, shafts modified, still using the tapered drive gear but now with a bolt instead of a nut and few holes to lose some weight. 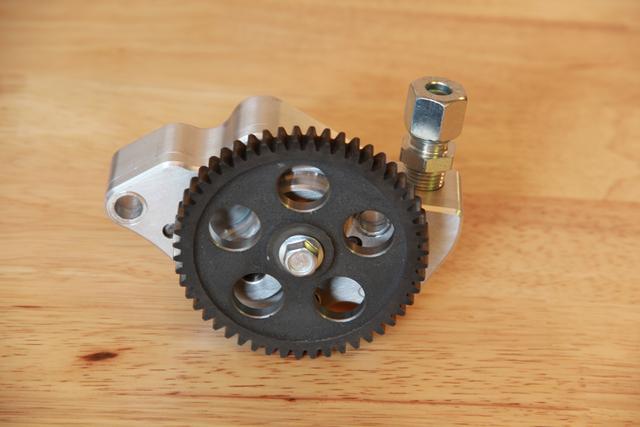 Pump testing. I could only run it up to half the rpm it would be running at when the engine is at 4000 rpm without taking a shower in oil. 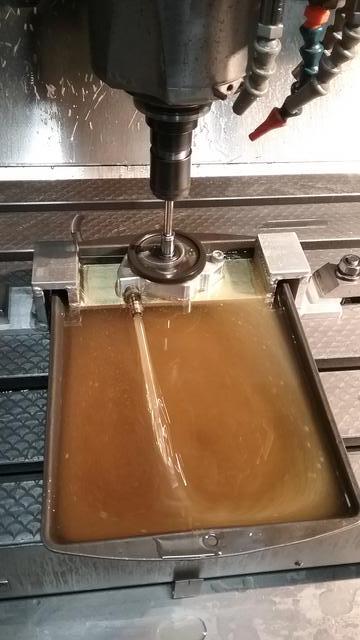 I read every full flow filter write up I could find several times so a lot is the same. Ream a .5 hole thru the center and drill out the small oil
passage to 8mm. 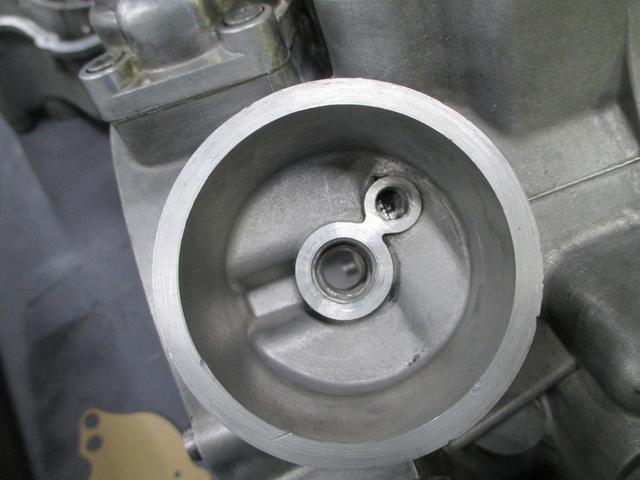 I couldn't see a good reason to have a fitting on both ends of the tube running from the pump to the filter so used 2 short pieces of .5 stainless
tubing with ends ground so they could be tig welded together. That slides in the upper .5 reamed hole and the pump gets a straight pipe that
slides into the upper fitting. 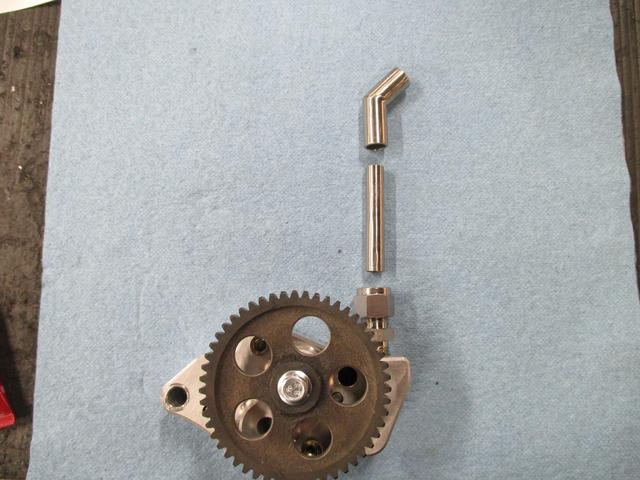 Slide the tubes together, bolt the pump in and a drop of green Loctite on the joints and done.
Even with no Loctite the pipe pieces can't move. 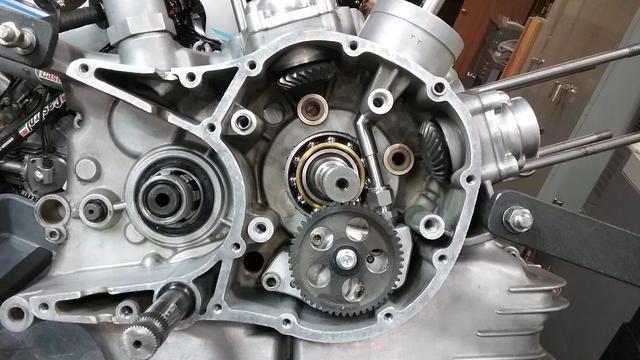 Nice work!! So did you use the internal parts of a Monster oil pump and make your own pump body?
Top

Yes, the body is 6061 aluminum, the gear shafts are pretty hard but turn nicely using ceramic inserts. There are pumps available to buy, but it
was midwinter and I had a machine available. I think I bought 4 pumps from various Ducati's and they were all very similar. I did find the drive
gear arrangement kind of odd. The gear is a slip fit on the shaft with a single loose key and a retaining ring on each side. In the 70's and 80's
they used a tapered shaft with a key and a nut tightened to 4700 ft lbs and you need a puller to get it off the taper! I considered boring my gear
and using the same design but the old gears are cast iron and I didn't think it would last long like that.
1978 SD Darmah
1979 SSD Darmah
1981 900SS
2017 Desert Sled
1982 Bimota HB2
Top

So, at this point I have an oil pump shooting oil straight up the center of the filter housing, and that won't work with a spin on oil filter.
The oil goes up and in around the outer part of the filter body, through the filter element and down and out the center. Luckily there is
quite a bit of room inside the filter cavity on the engine for an aluminum manifold to divert the flow of oil. The threaded steel piece threads
into the engine filter cavity, the aluminum manifold slides over it and a spin on filter threads on top of it. The oil goes up the center of the
steel piece, into the aluminum manifold and straight up 4 holes into the filter. Filtered oil goes down the center, into the manifold and straight
out the bottom 4 holes and into the engine. The steel threaded piece is drilled in each end to the small holes and solid in between them.
O-rings on the steel piece keep the oil flows separated. The aluminum manifold holes are plugged around the outside with setscrews,
they were necessary to get holes to turn corners inside. 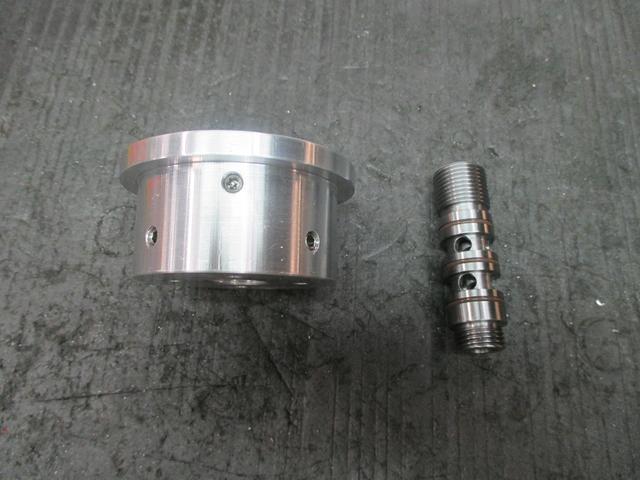 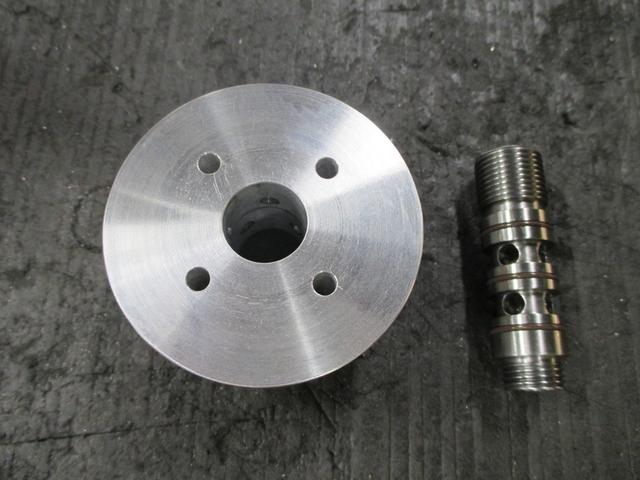 I chose a WIX 57035 - it's short, used on a lot of small engines and available at auto parts places. 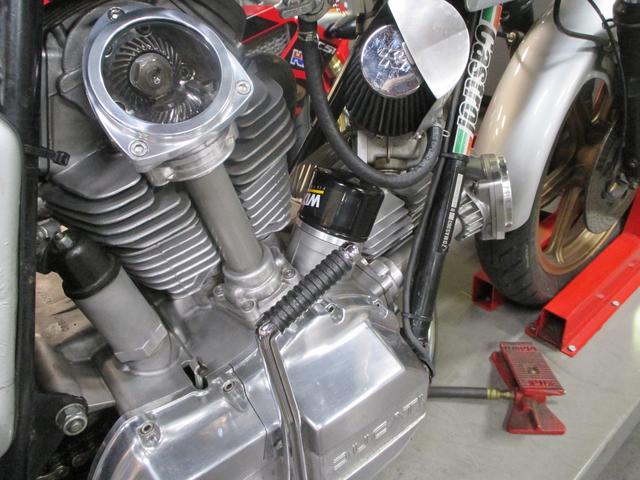 The old pump outlet is plugged with a short setscrew. 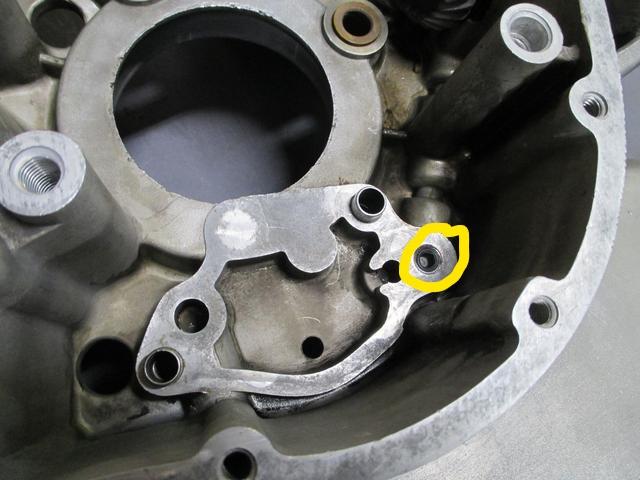 The restrictor Ducati presses into the crankshaft was drilled out - it looked like a spring pin.
Brass setscrews with a 1.5 mm hole drilled thru were used as restrictors in the cam supports.
The heads are still completely filled with oil soon after starting till it warms a bit and drains. 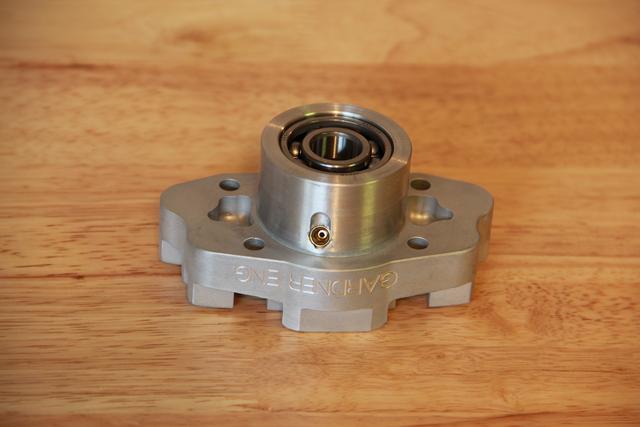 Update after 856 miles. After a long high speed interstate run I noticed oil drops on the case behind the rear head. It's coming from the head to
cylinder o-ring. I think when the oil is cold there is more pressure than the o-ring was intended to hold because of the restrictor in the cam
support shown above. I don't let it warm up very long so the thick oil and higher revs when building speed pushed some oil past the o-ring.
If you install restrictors put them in the case passage so all the pressure is before the cylinder base gasket and the cylinder to head o-ring.
I'll drop the engine, pull the heads and cylinders, fill the passages with grease and tap them for the same restrictors I hope.
Other than the drips it's running great. 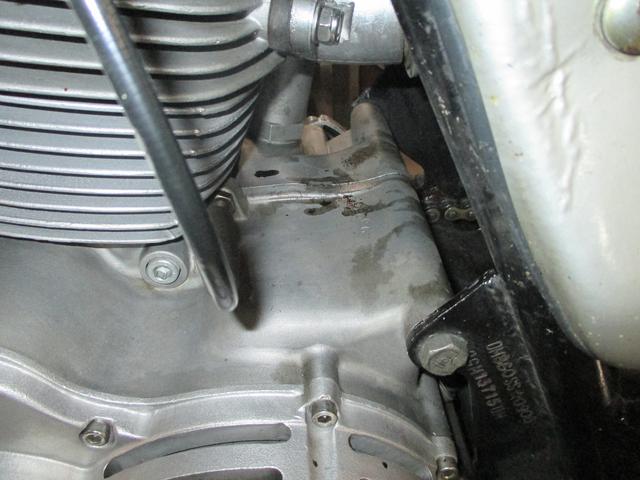 Wealth of information!! Thanks for posting all that Gardner. Job well done.
Top

After 1380 miles it was time for an oil change but first I wanted to move the oil restrictors in the cam supports to the cases to take pressure off
the o-rings in the cylinder to head joint. I pushed some thick grease into the passages and tapped them to 5/16-18 maybe 3/8 deep.
Was no need to drill them out as they were already to size for 5/16-18 or M8x1.25. McMaster-Carr only has brass setscrews in 5/16-18.
To clean the grease and chips out, temporarily install a solid setscrew, hold a vacuum hose over the other hole and place a rubber tipped air
gun to the oil passage at the the bottom of the left case that feeds the crank. A quick shot of air and the plug of grease and chips goes in
the vacuum, move the setscrew to the other hole and repeat. 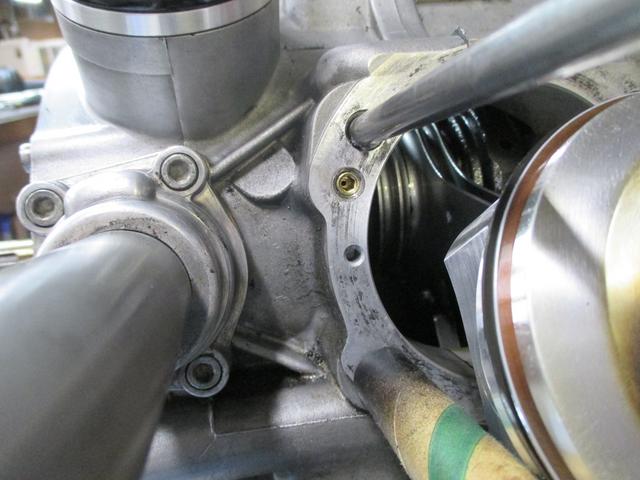 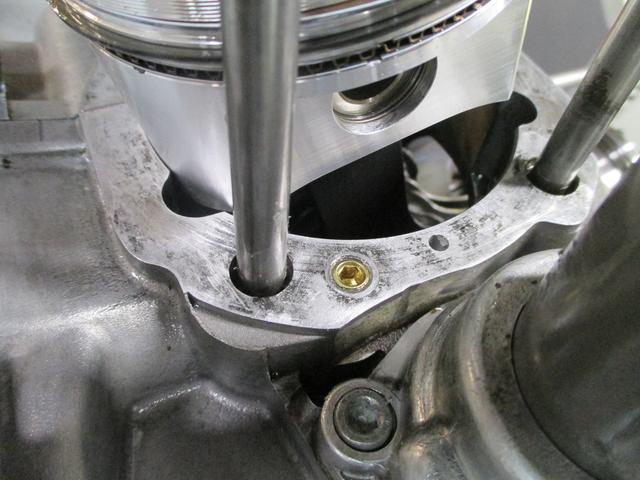 Temperature reached 50° today so I went for a 30 mile ride. Probably one of the last for this year.
Total on the engine since rebuild and start up back in May is 6861 nearly trouble free miles.
Had some oil push past the head o-rings that was fixed by moving the head oil restrictors and the dry clutch nut came loose.
I'll pull the engine and disassemble this winter and see how everything looks.
1978 SD Darmah
1979 SSD Darmah
1981 900SS
2017 Desert Sled
1982 Bimota HB2
Top
Post Reply
12 posts • Page 1 of 1