Thanks fellas. I tend to put a lot of miles on my bikes. I ordered the new unit and some Dynatek coils. Coils have arrived and the ignition is on it's way from england.
I'll do another post with install photos and instructions, since they seem to be a bit sparse on the internet.
Top

I have a pile [nine I think] somewhere in a box in the black hole that is my garage. To say they were unreliable is gross understatement. They were in my race bike and all of them died in the course of two seasons, two were junk right out of the box with one cyl. intermittent and the rest died on track usually when running at or near the front. Yeah, I harbor a tiny bit of bias.
Top

Work in progress. Hopefully I'll finish up this week. Have to reroute a lot of the custom loom of Motogadget stuff I made. I think I'll move the coils in closer to each other and mount the ignition control unit on top of them. The thought was to mount between them but that won't fit.
For those struggling with pulling the flywheel on this duc (the worst I've ever done) I used a 3 jaw puller and had to grind one arm down to fit on the 7-8 o'clock position on the flywheel. Once locked in and tightened down, a good bit of PB blaster, heat and tapping with a hammer on each jaw of the puller. It will quite literally pop off. Took a couple hours of being patient and gentle. 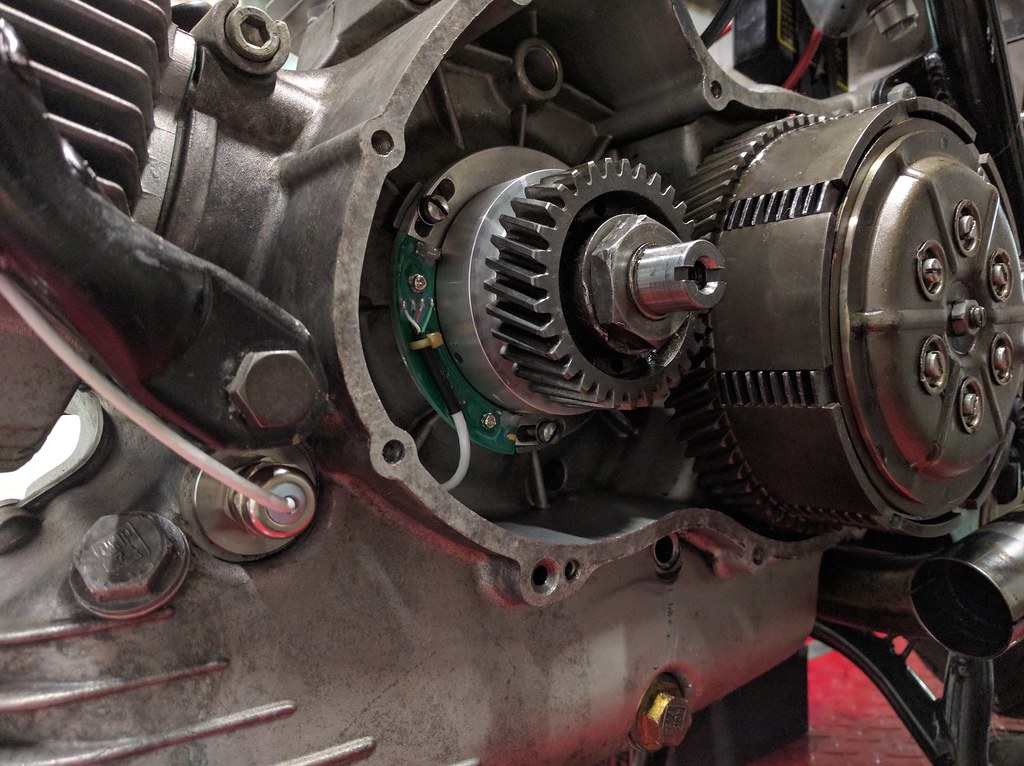 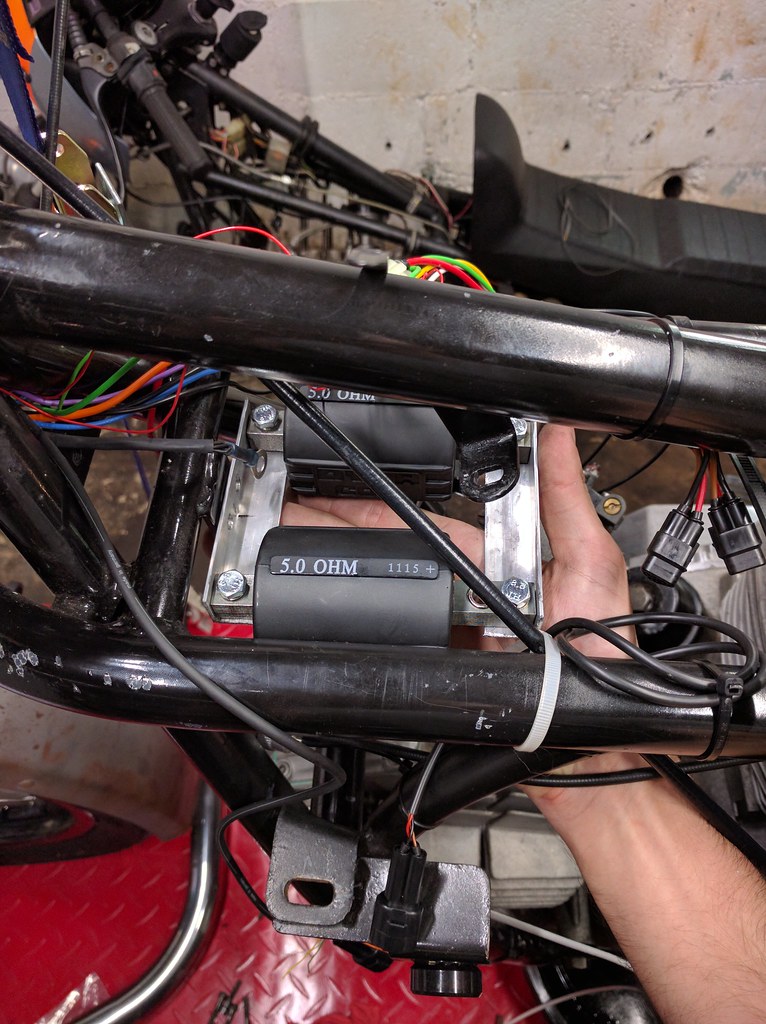 New ignition installed and timed. Timing was pretty easy on it.

STILL no crank. Same characteristics as with the stock ignition. Gotta wrest my ankle again from the kick back.
Top

I certainly admire your tenacity Blaine.hale. Most would have given it away by now. Kicking back always spells ignition timing issues to me. I have never dealt with a petrol motor with suss cam timing so not sure how they'd react. Never seen a carb cause kick back either but maybe if it's sucking air???? Cause I have'nt experienced it does'nt mean it can't happen.......
But seen a few with the ignish outa whack and they transform into evil snarling back kicking beasts.........I'd go back through the timing procedure. You said it was easy, that can't be right!
Top

Lumpy wrote:I certainly admire your tenacity Blaine.hale. Most would have given it away by now. Kicking back always spells ignition timing issues to me. I have never dealt with a petrol motor with suss cam timing so not sure how they'd react. Never seen a carb cause kick back either but maybe if it's sucking air???? Cause I have'nt experienced it does'nt mean it can't happen.......
But seen a few with the ignish outa whack and they transform into evil snarling back kicking beasts.........I'd go back through the timing procedure. You said it was easy, that can't be right!

Just when you think you've learned everything with bikes, there's more to learn! I can't turn away from more knowledge and a cool bike.

I should probably specify that it's easy for me haha. I have about 8-9 different bikes all with different timing methods. The duc is just tedious but not hard.
I use a dial gauge and a piston stop on the duc to find tdc. According to the Sachse instructions, you time by the horizontal cylinder first. Find TDC, bring the piston about to BDC then rotate the motor clockwise until the bottom (first light) shuts off or goes dim. This light should shut off right before TDC. a little adjustment on the plate and, whammy, it goes off right before I hit TDC. Just curious as to when the vertical cylinder hits, I keep rotating the motor clockwise, and sure enough, the second light cuts off right before 90 degrees.
I'd say that's timed but maybe someone else with the same ignition can correct me and say it needs to shut off at a certain degree before TDC.
At any rate, the time is close enough within a couple degrees that the bike SHOULD start.

I've had many bikes that would run (like crap) with timing way off, even 180 degrees off.

Only the vertical cylinder has ever kicked back on me. It will ignite what ever made it into that cylinder, puff some grey smoke out of the carb and slam the kicker back up. I've always known that to be an issue when timing is a bit pre-mature. Like I said, though, it should still crank in theory. I can retard the ignition later if the kickback persists.
Last edited by blaine.hale on Sat Sep 24, 2016 9:36 am, edited 2 times in total.
Top

For those who plan on doing this ignition, here's how my setup ended up looking. It's not too bad. I'm going to go back and swap some wires out so gauge is consistent. Had to use what was laying around. I'll add a metal bracket on that rear support instead of a zip tie as well. It's rock steady, for the time being. 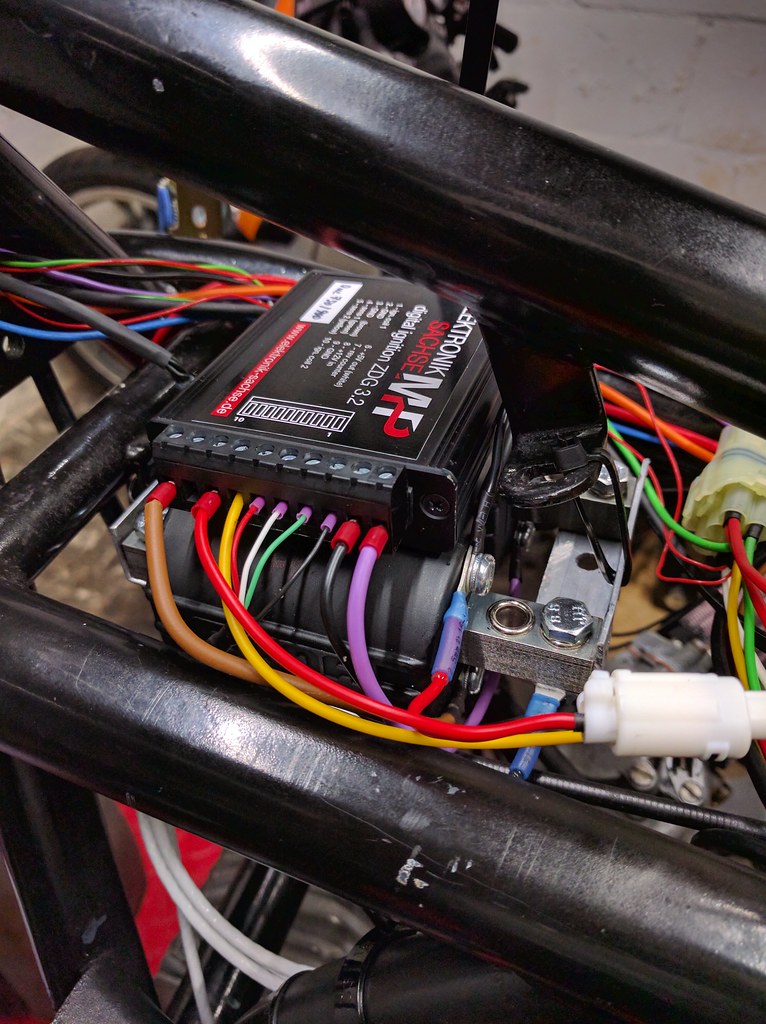 Watching with great interest here as I have stumbled across the same system at a price that I just could'nt turn down. It's laying in the glory box as I type. I'm yet to install it due to another project.
Top

At the risk of stating the obvious, the TDC you speak of is compression stroke. Not exhaust stroke. Hey it's been done before.......
Top

Lumpy wrote:At the risk of stating the obvious, the TDC you speak of is compression stroke. Not exhaust stroke. Hey it's been done before.......

This ignition doesn't specify but that's always what I time things to. The ol' finger over the spark plug hole to feel which stroke.
Top

Maybe its an advance curve thing, most of these digital ignitions have a few to choose.I love my Ingatech fitted to my Laverda,so many clever bits including the ability to rotate the engine twice to load the sprag before it sparks.
Top

It's been mentioned before and it's easy to forget, The engine turns clockwise [backwards when viewed from the left] and it is timed off of the vertical cylinder in the service manual [bang] 270 deg. later the horiz. cyl. comes up to TDC on the compression stroke [bang] it seems if the instructions start with the horiz. so it would seem the vert. cyl. is 180 deg. out of time. The belt drive engines are timed off of the horiz. cyl. as they turn counter clockwise [viewed from the left],much like everything else in the known universe. So, if it has 2 pickups 90 deg. apart and 1 trigger[magnet] I would imagine the upper pickup is for the vert. cyl. and the lower for the horiz. That would give the 270 deg. separation between bangs. Perhaps the wrong instruction sheet was included? Humans are involved and things can happen. I'd start over with a fresh outlook and maybe a beer.
Top

Here are the instructions that accompany the unit. They're not exactly clear or the best english, if anyone can interpret it different from how I mentioned I timed the bike:
https://www.elektronik-sachse.de/ZDG3/s ... c/&lang=en

With starter:
First, the piston from the horizontal cylinder must be brought exactly to TDC. Then make a mark (with a felt) on the flywheel and the crank case, so that this position can be quickly found again. Now bring the piston nearly to the bottom dead center (has not to be exact). Then turn on the ignition and turn the crank slowly clockwise until the LED turns on at the lower sensor first (maybe it will light even when the ignition is switched on) and then after 60 deg. rotation it switches off again. The distance to the TDC marking now must be compensated by turning the sensor plate clockwise.


Without starter:
Bring the piston nearly to the bottom dead center.Then turn on the ignition and turn the crank slowly clockwise until the LED turns on at the lower sensor first (maybe it will light even when the ignition is switched on) and then move the piston exactly at TDC position. Now rotate the pickup plate counterclockwise until the LED is switched off at the lower sensor, the correct position is achieved.

I'm happy to report it's purring like a kitten now!

I went through timing again and noticed the vertical cylinder was firing when the horizontal should be. Their instructions and labeling are backwards!! (Sachse ignition.) Swapped the 2 wires at the ignition module and retarded the timing about 2 degrees to get the kickback to stop. What do ya know...fired up in 2 kicks.

It's idling fine and running great. Bellowing smoke from all that oil I put in the cylinders, though


Thank you all so much for sticking with me on this. I learned a dog doodie load about Ducatis just from this thread and it's incredibly useful for me, going forward. Time to test ride, fine tune and clean up the wiring.

Cheers everyone. Beers on me, should we ever meet!
Top

Well, that was short lived.

Got the tank on and a few things squared away for a test ride. Pop into gear and head up the driveway. Suddenly dies mid acceleration. Kick it and its giving me a good bit more resistance. Feels like a soft seize.
Drain the oil, smells like gas. Yay.
Kick it over with no plugs in and there's a good amount of resistance and a clunk noise.
Top
Post Reply
80 posts