Hi everyone - I'm looking for info on this bike: model and year if possible. I know it's a 200cc from the cast piece on the side of the head, and I know the registration (PME 166L) which I think makes it a 1972 machine. I have so far found two codes stamped into the engine casings: DM200 and 154087. I have yet to find a VIN number, but from what I've read they were stamped onto a foil, which has a tendancy to part company with the bike... Any info on what to do in order to re-register the bike in this situation?! (I'm based in England) The form I downloaded states that if I don't give a VIN the form will be returned to me! 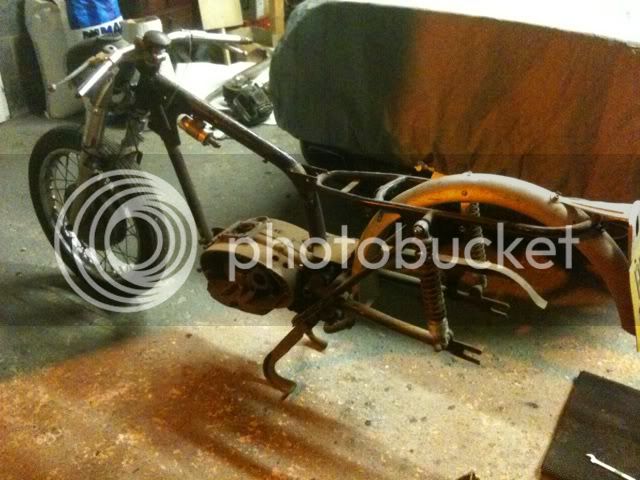 A photo of the tank and sidepanels please.
Top

Is there no frame number on the spine of the frame, above the battery tray?
Try getting in contact with Peter Ward at the DOC GB. He should be able to date it for you.

Ah... No can do. Unfortunately I don't have either of those items

I'll go have a good look round near the battery tray now. Fingers crossed as I think finding this will make life a lot easier!

Update... Just had a look in the area around the battery tray: couldn't see one, although I haven't got all the paint off yet so I'm still hoping. There was a concerning area toward the front of the near-vertical tube where the battery tray is connected that seems to be completely missing all its paint. Seem to be a few score marks in there too... On an otherwise quite solid, paint covered frame, I'm starting to get worried

frame number on my narrowcase is faintly stamped on vertical spine near battery on rhs. Hard to see and would be lost under new paint.I would build this as an elite ,a valuable bike with great looks ,only really difficult part a chrome jellymold tank,do not under any circumstance throw anything away however poor its condition .(not that you have too much to start with!) If I had to guess I think this was a touring bike rather than a sports model.And earlier than the reg no suggests.
Top

Interesting. That's a narrow-case frame and engine. Which on first sight makes a nonsense of your registration date of 1972, since narrow-case production stopped in 1968. But read on ...

According to Ian Falloon's Standard Catalog, the engine size and number make this a 200 Élite, Super Sports or GT. To support this, on Steve/Bob Miller's list, there is a 1961 200 Super Sport in the States with engine number 155039. So pretty close to your 154087.

The Elite and Super Sport was built between 1959-65, the GT between 1962-62. However, according to Mick Walker's Ducati Singles, sales continued in the UK for some time afterwards, when a batch of 200 Élites were imported in 1965 from Germany by King's, the then concesssionaire. And he goes on to say that Vic Camp, who took over from King's, was still selling them 2 years later. Or maybe even in 1972 - ?

Don't fuss over a VIN. They didn't exist at the time, certainly not in the way that is recognisable today - the 17 number VIN system dates from 1980. Use the frame number.

And here's an Élite And a factory brochure Mototrans were still building Elites up until 1971, with a 5 speed gearbox.
These all have MD stamped either side of the engine number.
Whilst it's unlikely that this bike is one of them, it may explain Vic Camp selling them in the early 1970s, as he certainly imported the 250 De Luxe and the 24 Horas.
Engine number 154087 should be a B series Elite with the wider head bolt spacing.

Very interesting post.
I don't have Ian's book but will order it asap.

Any help would be greatly appreciated. As I have 2 complete basket cases and no clue as to what they truly were.

Cheers and congratulations to Jon on his new Elite/GT project!

I meant congratulations to Tom...sorry for the error.
Top


kmatts1959 wrote:I don't have Ian's book but will order it asap.

The other book you might like to consider is Tom Bailey's, Ducati Singles. Steve has them both listed in his on-line shop, btw.

Wow, you guys are a mine of info! Where to start...?! I guess many thanks for the congrat's!

The hunt for a frame number has come grinding to a halt as I decided to get everything stripped down. I took the engine out, split the casings, degreased and cleaned it and that has come up quite nicely. Not found any major damage apart from a chunk of casting inside to the rear of one casing that has obviously been broken and repaired at some time. There were a few little bits of metal in the massively sludgy oil (found a piece of newspaper in the bore that is dated February 1988 so she's been sat that long at least!) one of which looked to be a small circlip possibly. See attached for the before, repair and after.

The speedo only reads just under 8000 miles, which I guess would be pretty spot on if it was only registered in 1972 and was stripped and laid up by 1988!

Re. the dating... I was told by the guy who had it, he bought it at Cadwell Park years ago and was told at the time it was an Elite. I'm inclined to belive this simply on engine size and some of the spec's as you've listed. Seems from some of Mick Walkers books these would be the only options. Few strange things I've noticed, however: there is a third lever attached to the handle bars. I think this would have been for decompression during starting, but in Mr. Walker's Ducati Singles Restoration I'm sure it states these only came on 450's? (Please correct me if I'm wrong!) Could be that these bars were simply pinched from a 450 though I guess? Also, the shocks on the GT pictured seem much more similar to the ones I have.

Next thing: the engine. I've been reading about the build of these engines. Now I've messed about with a 54 Ford Pop 3.5 V8, a Lotus 7, various VW's and a Lotus Elise and none of the aforementioned engines have seemed as fussy or as 'needy' as Mr. Walker seems to suggest! Am I going to be up to re-building an engine or would you recommend an engine builder? If the latter, who? I have a good garage, most standard tools and a few specials such as bearing presses etc but no lathe, mill, crank balancing V, or quite a few of the other items Mick mentions! Amusingly, he only lives about six miles from me so maybe I should just call in and see him haha!
Top

Hi. You will need a manual and plenty of reading and thinking time as a minimum.Important to , not mix up any shims, crank will need strip and clean and rebuild by an expert, crank must have zero end float (fitted) free to spin, bevel gears a minium of slack ,gentle accurate work, an expert told me he takes 20 hours to assemble a motor, I had my motor up and down many times over about a week , the biggest problem i faced was previous poor work (by a non Ducati bike shop) and identifying and finding missing shims ,spacers etc.Areas easy to damage are , bearing housings !!,clutch basket, cam tunnel, alternator flywheel ,crank ends.Forget anything you learnt on other motors,this is different,anyone can put one together but getting it to run well ,reliable and oiltight will take a lot more care than is usual. You can do it ,but take lots of time and ask!!.
Top

Ok this bike is almost certainly one of the ones from the infamous Hannah shipment, which was a consignment ment for the States that the Berliners turned back and ended up in the UK in 68 or maybe something that was imported from Europe many years ago and has been given the worng age related plate.

Do you have a V5C document for the bike to match the registreation number? If not you would be better off re-registering.

Please contact me off the forum, as I am on the DVLA dating list and can help.

hititfaster wrote:... or would you recommend an engine builder? If the latter, who?

How quick do you want it done? Most of the good guys are booked up some months in advance. However, I'll pm you a few names.