[I was out garage saleing this weekend and came across a set of Marzoochi external reservoir shocks. The seller said they had been left in the garage of a rental and he only wanted $10 for them. So I bought them. It turns out that they are exactly the same length as the stock RD400 shocks. So I was considering using them on my RD400 build. I think that I will need to replace one set of bushings on the cartridge since they are too small, but the other set is just right.
The folks over a 2 stroke world told me that they were stradas. Someone provided me with a manual, but it doesn't have any info on the specs in it.
This brings me to my questions. I could not find anything on the web about them. There are no part numbers on them.
They started out red, but someone painted them ugly yellow.
I need to identify what model they are. Were there different variants of this shock?
They look to be rebuildable. I am wondering if anyone knows where to get a rebuild kit or the specs like what oil to use and how much.
The manual has info on changing the washers to change the damping rate, but is fuzzy on what the rates actually are.
Which side is up? The cartridge end or the rod end. I presume that it is rod up.
Does anyone have any ideas on figuring out the spring rate.
I'll probably think of more later, but this should get me started on figuring this out.
Bill W
attachment=1]marzoochi1.jpg[/attachment] 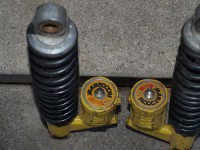 yep they're Stradas. The most common way for them to be mounted is rod up and the reservoir to the rear but they can be mounted any way round and they will work the same. They are rebuildable but it's a good trick. You have to use exactly the right amount of oil when you put them back together and from memory it's a good trick to get the oil in as you put them back together with new seals (with the oil in the right place). If there is any marks or pits on the rod they will just leak, they are a lot funnier like that than front fork legs, you can sometimes get away with tiny marks on forks.
I did up a few sets of Stradas many years ago with mixed results. Nowadays I've got half a dozen sets of them in a stack on the shelf and have got other shocks on the bikes. It was impossible to get rebuild kits for them for awhile (here in Oz anyway) but I heard awhile ago that they were available again (Steve would know). I saw a set of Stradas on ebay a little while ago go for a few hundred bucks so you did well scoring a set for ten bucks. I have seen them in red, black, or grey but never yellow, that might suit a Yammie anyway...
Top

The good news is that the rods are not scratched. They seem to be holding oil, but I have not checked the air reservoirs. The manual warns about oil leaking out when you take the pressure off means the bladders are leaking. Since no oil is leaking on the seals, I am almost thinking that I shouldn't take them apart. But the paint is chipped so that I do need to strip them for refinishing. That would probably be easier if they were pulled apart.
Bill W.
Top

if the rods are good and they don't leak oil and the damping works the last thing you want to do is pull them apart. Just take the springs off and mask up the bits you dont want to paint. Working Stradas for ten bucks, buy of the century........
Top
Post Reply
4 posts • Page 1 of 1