Looks fairly likely (pending the owner's sorting out the ownership paperwork) that I will be acquiring a rolling basket case '73 750GT. If the trigger actually gets pulled, I hope to use the board resources to locate some of the missing parts as well as information on practical mods and engine overhaul data.

The bike has had the engine removed and disassembled for (so the owner says) about 10 years. The engine parts have be stored in a covered, but unheated place most of that time. I had a look at what's there and a couple things became apparent. First and worst, both cylinders have gone missing, likely grabbed by a street person metal recycler. Also see that the entire exhaust system is missing. The crank has been pressed apart and the rod wear surfaces at the big end bores show light scoring and corrosion damage, likewise the crank pin. Otherwise it looks like all the parts are there, though rather mixed up with various shims sitting in the bottom of one box. Light, but not as what you could call potentially damaging corrosion on studs, K/S shaft, etc.

The rolling chassis was in a different location and is fairly complete - also stored inside, but not heated. It is missing one instrument can't remember if it was tach or speedo). The front rim has been replaced with a shoulder less aluminum one. The tank has little rust inside. fenders, tail light, headlight, etc. are there. Little rust on the fork tubes.

So .................... if the owner can get the ownership paperwork sorted, he has proposed a pretty reasonable price to start negotiating. If it happens, then I need to assess whether it is sensible to attempt a restoration or just clean it all up and flog it off piece at a time. My inclination is to restore it, so I'll start out looking for a pair or cylinders and take it from there. Anybody have a pair?

I'll probably find out if this is going anywhere this week and will update.

If I get it, then there will be.

by geodoc
Was able to seal the deal and get the ownership paperwork. Picked up the boxes containing the engine parts and a few misc. bits like side covers, kick starter lever, side stand, etc. Tomorrow I'll pick up the rolling chassis then clean, sort, inventory. 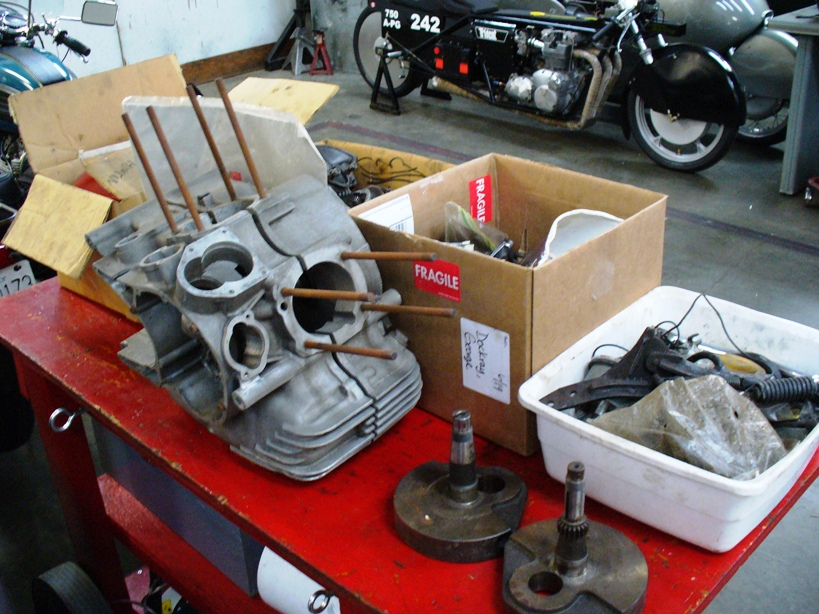 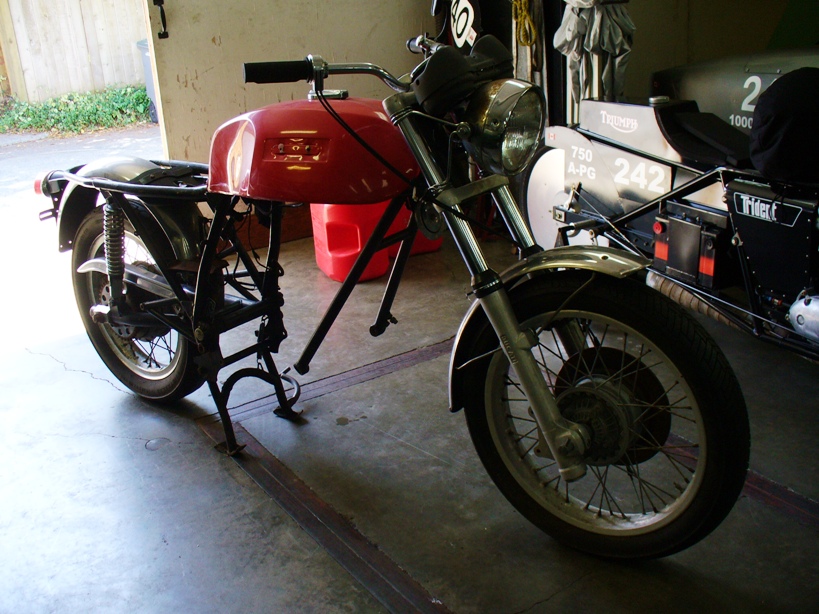 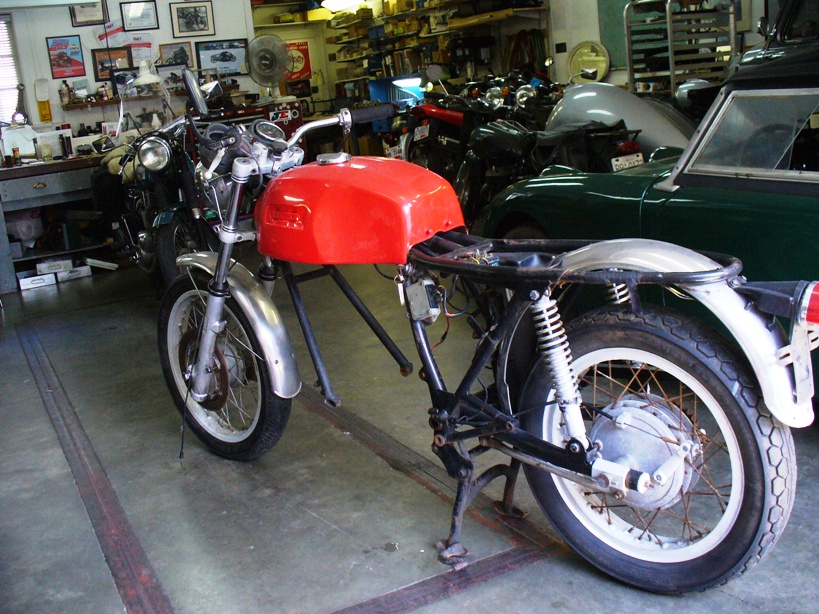 by BevHevSteve
Looks like you are in for a fun project there..

BevHevSteve wrote:Looks like you are in for a fun project there..

It's going to be a slog, but worth it in the end me-hopes.

Lots of info to absorb, not having previously been amongst the beveled. A Guzzi oriented person in the past.

by thessler3
You have an unusual machine there. Most 73's had a fiberglass tank in the US. Your rear shocks do not look like stock either. It has the stainless fenders which are nice. Have fun finding those cylinders. I seem to recall a site in the UK which might have them.

thessler3 wrote:You have an unusual machine there. Most 73's had a fiberglass tank in the US. Your rear shocks do not look like stock either. It has the stainless fenders which are nice. Have fun finding those cylinders. I seem to recall a site in the UK which might have them.

Started cleaning, inventorying and inspecting the engine parts today. Nothing obvious for trouble (the crank pin / big-ends which I knew already) except a ruined kick starter shaft spline. Seems that I read somewhere that an 860 / 900 shaft assembly would work as a replacement.

A number of 'mystery shims" that were in the bottom of one of the boxes with (among other things) gearbox parts.

Layshaft 5th gear is stuck on the shaft. Not seized, just stuck to where I'll need a puller to get it off. Odd .................... I've also heard that there are some lubrication mods that can be incorporated into the gearbox, though nothing specific as to what those mods might be.

How the &$)@*@ do you get the snap ring out of the breather housing w/o stabbing yourself in the hand w/ the awl I'm trying to get under the end with?

Thanks for the heads-up. My hope is to be getting a pair of barrels from another source for considerably less, but if that doesn't work out, maybe these will.

Thanks for the heads-up. My hope is to be getting a pair of barrels from another source for considerably less, but if that doesn't work out, maybe these will.

Thanks again for the heads-up.

by geodoc
The rolling chassis is set aside for the moment while concentrating on getting the engine parts cleaned, inventoried and inspected.

Almost finished with getting the last of the engine disassembly - bearings all removed from the cases, distributor disassembled, one head striped & one to go. 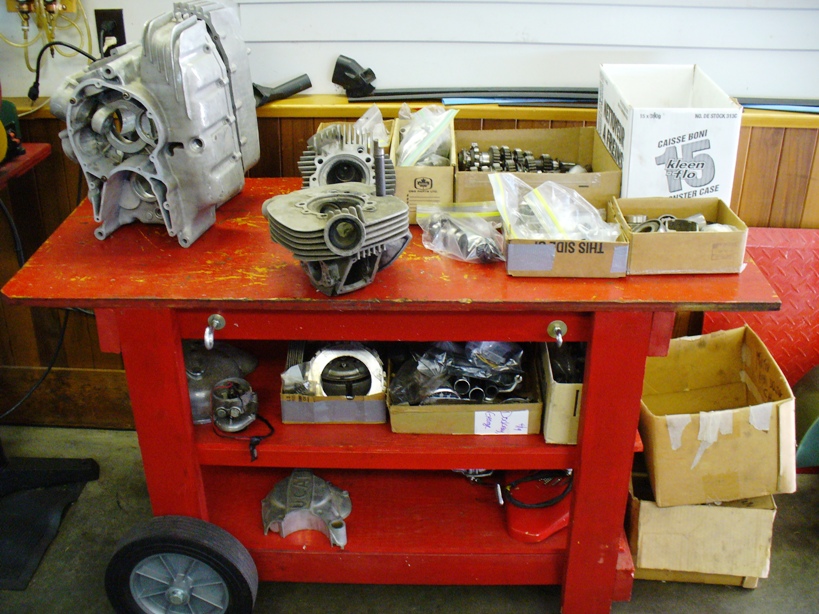 Pleased to see that there is very little wear / damage on any gear teeth or dogs. Shift forks show minimal wear. 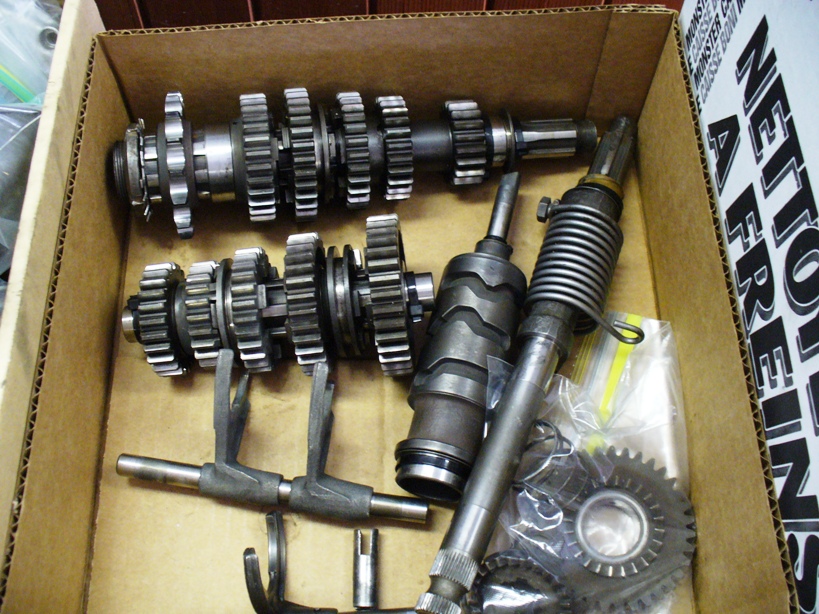 One problem with kick starter shaft (315mm type). It looks like the kick starter was loose at some point and the through bolt wore into the splines. I've had no good suggestions for ways to make a permanent repair. This shaft is apparently available reproduced for about $400 CDN. Not wanting to assemble and just hope that with the kick starter lever well cinched down, it won't end up with further stripped splines and then having to re-split the cases to deal with it, I'll probably spring for the new shaft. 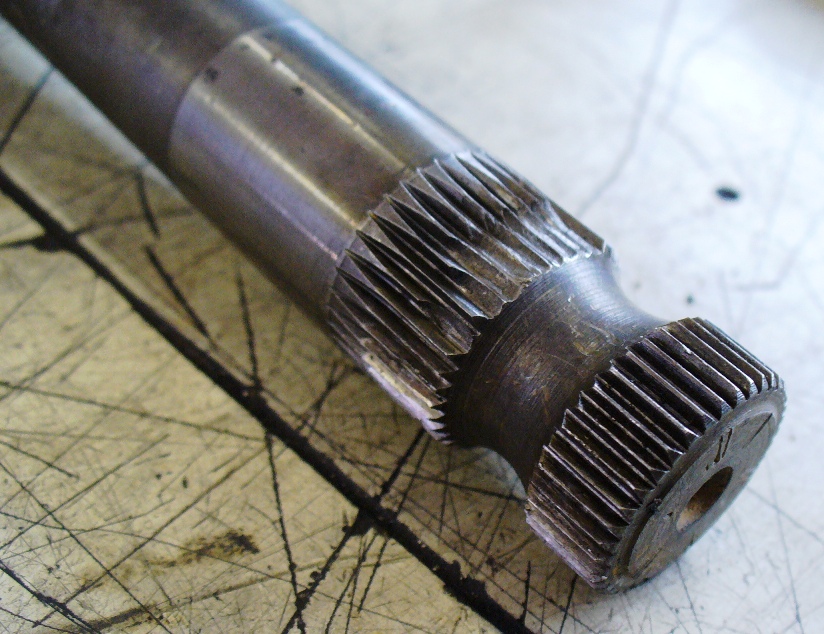 I noticed that there are two kinds of valve covers in the pile (3 'shallow pocket' and 1 'deep pocket'), though the parts book only calls out one type. The folks at BevelHeads informed me that the "deep pocket" type were for later models that had conventional screw type valve adjusters. This one has variable thickness lash caps, so the 1 odd cover is a replacement & will go on the less conspicuous rear cylinder intake position. 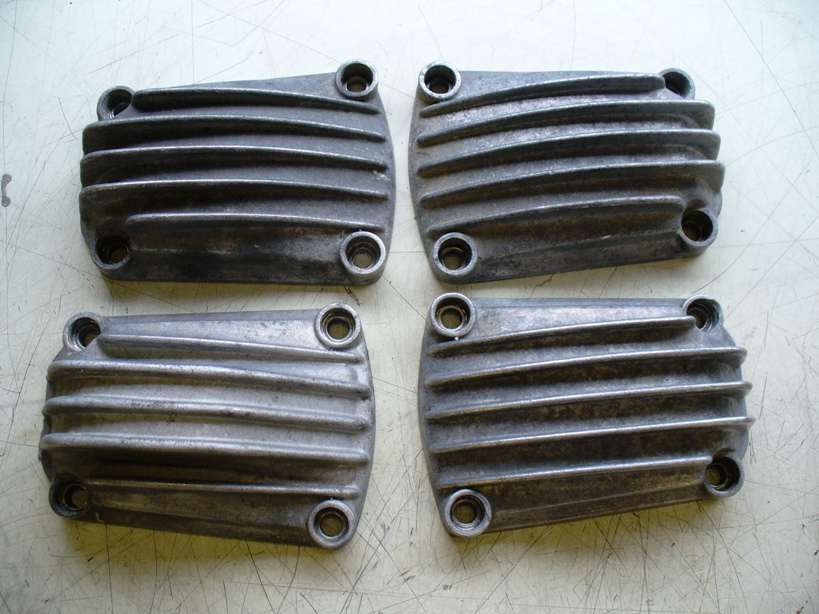 by geodoc
Cases are all cleaned and inspected. The reason for the disassembly may have revealed itself. I see that in the RH case, above the drive sprocket that there has been a weld repair done. Looks like the chain let go and knocked out a chunk. The repair looks very well done (my machinist / welder friend had a look and pronounced himself impressed).

Interesting too is evidence of other welding - the lower fin on the RH sump case half has been repaired by the build-up and grind down method as you can see in the picture below. Again, very nicely done. There other evidence of grinding, though no internal evidence of welding on the RH sump. Trying to fix a porosity leak?

There was also some grinding evidence on the RH case, forward engine mount boss. Very hard to tell whether it was welded or just just ground for a bit of aesthetic smoothing.

Previous owner looks to have been less than diligent on keeping his chain adjusted too. 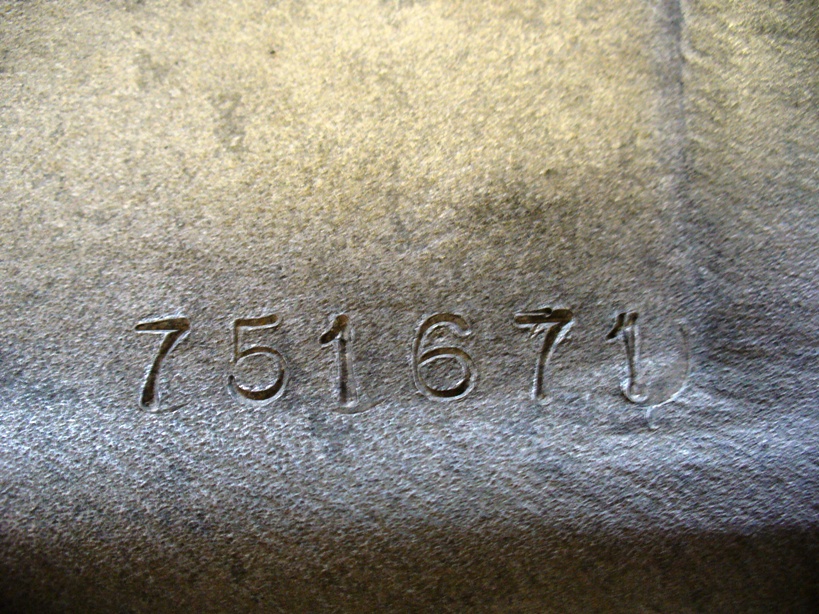 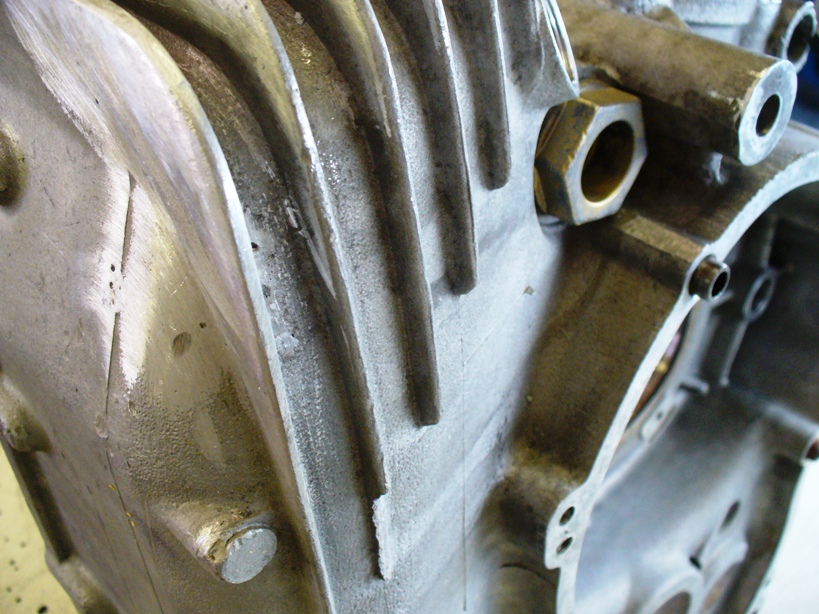 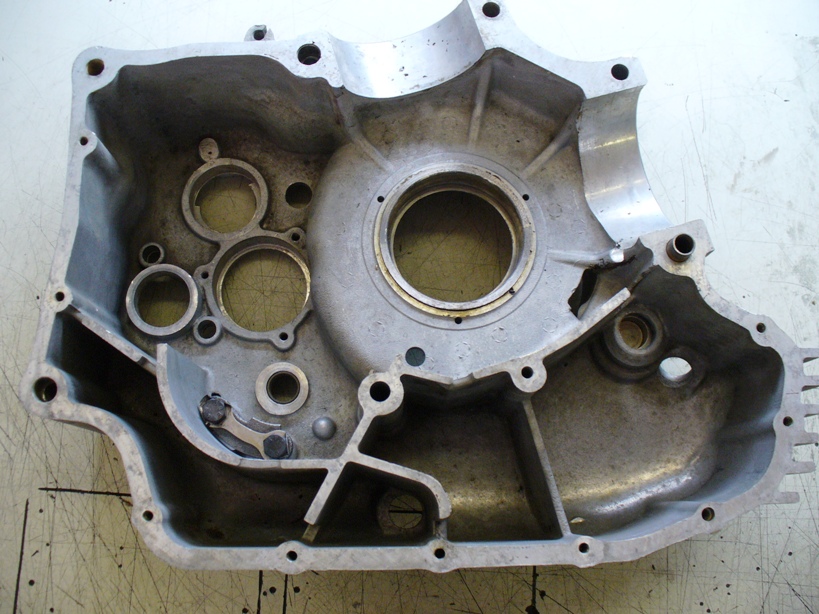 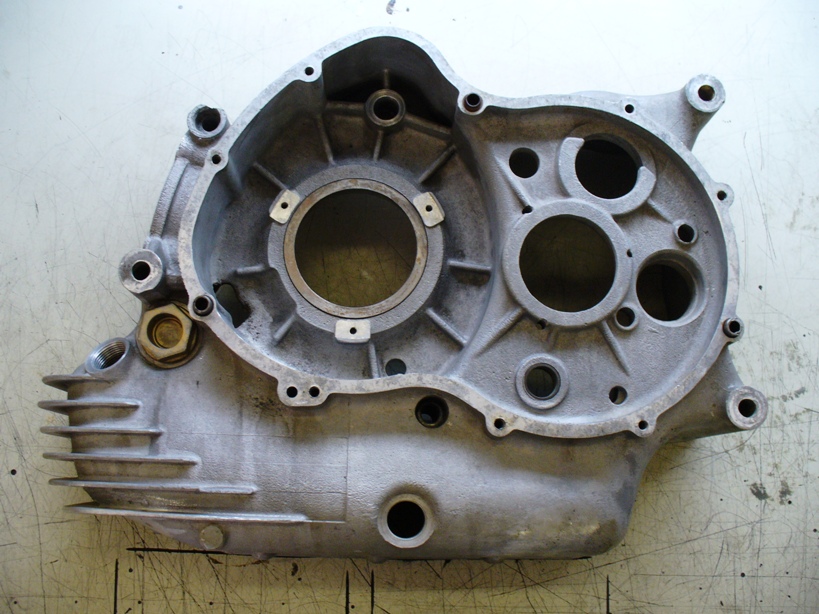 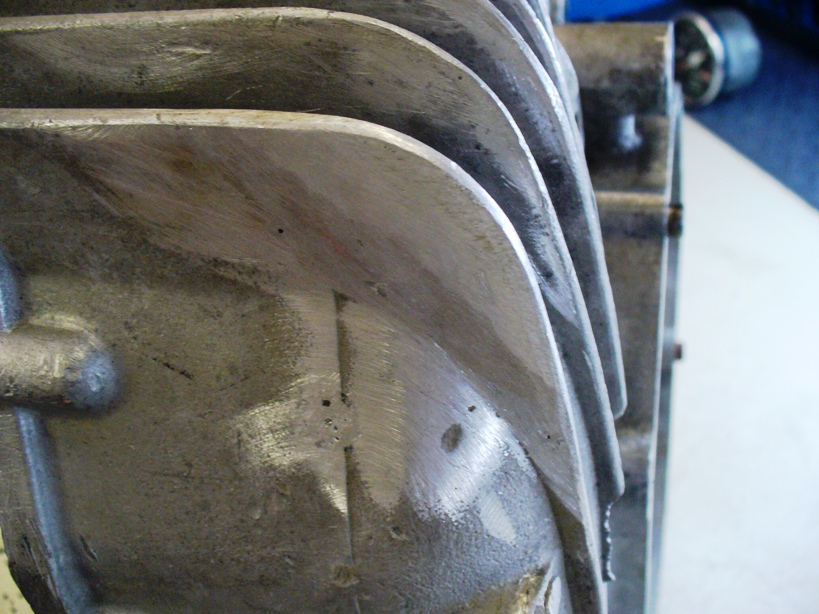 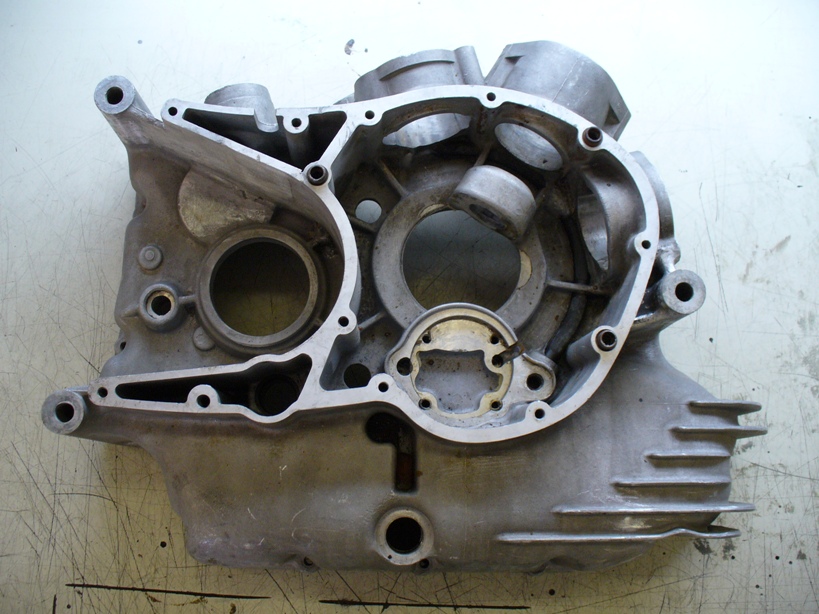 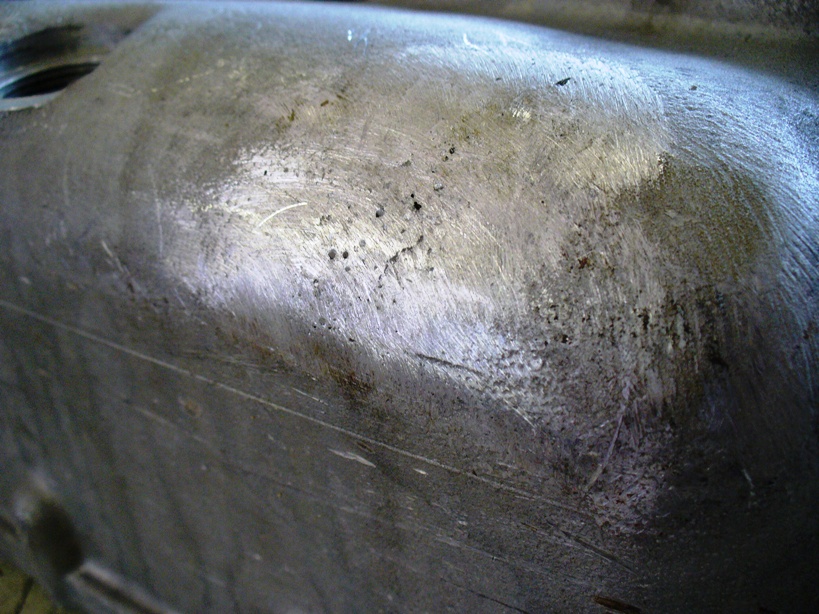 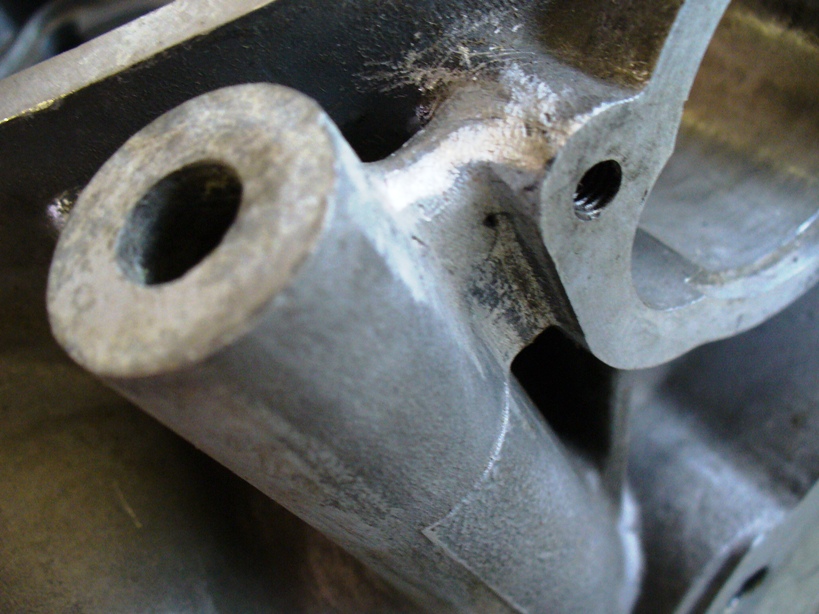 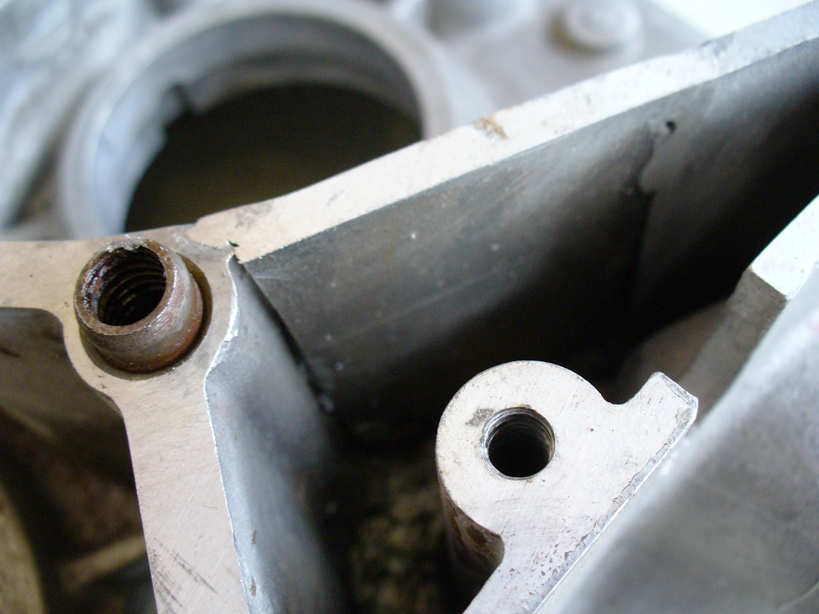 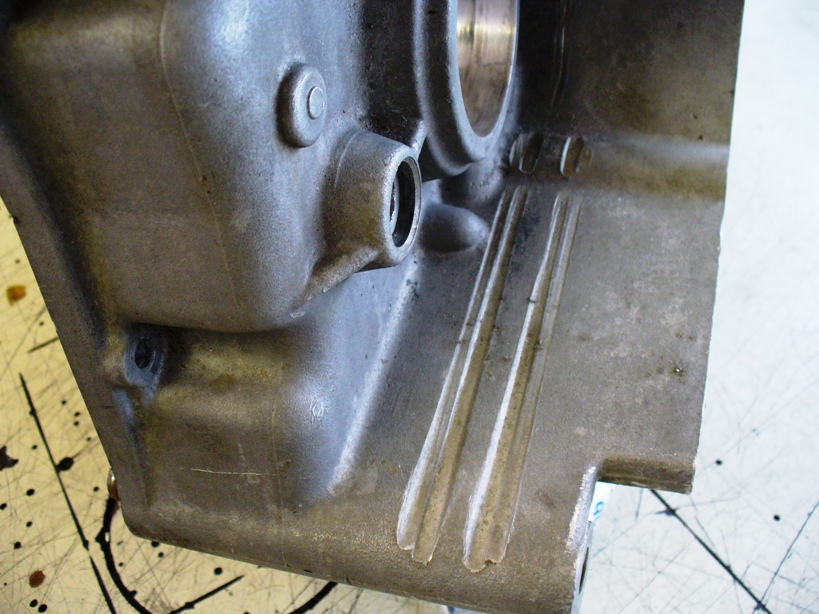 by BevHevSteve
Thanks for posting all the pix - keep it up!

A tip for making the cases look less like there has been grinding etc is to use a very course sand and sand plast the aluminum where it was ground or wire wheeled. With patience you can hid that pretty well from glances... You will always see it of course, but the casual observer may not notice.
All times are UTC-07:00
Page 1 of 11