Also: Absent a chemical sealant fix approach such as the one you've just showed us-or prior to a chemical fix?-one can/(should?) peen the casting somewhat gently with a rounded/chamfered pin punch.This assumes you can get to the area with a punch,and I don't know how successful the method usually is.We did it at Honda's behest on one problem casting that I remember.Can't remember if it worked or not!
Top

Took the GT to the dyno today to do a little carb tweaking.

Next fussed with the pilot jets and ended up with 62's. I had noticed a stumble off idle that felt like leanness and Dave the dyno operator felt it sounded lean there as well. Removed the 70/2 slides installed & replaced with a pair of 60/3 early-type slides I had kicking around from some Guzzi I guess. A bit worn, but serviceable. Left the K5 needle in the middle notch. Fired up and saw a bit difference - much cleaner transition.

Dave felt, looking at the gas numbers that it might be worth trying a needle with the same tip diameter, but a little smaller (richer) shaft. I'll look to see if there is such a thing amongst dellorto needles. For the moment though, it looks pretty good, nice flat torque curve, smooth transition and steady, even idle. Tomorrow I'll have a chance to rde it a bit and see what sort of ridefeel it's got. If it feels good, I'll leave it be. I've seen on Guzzis that after leaving the dyno with near perfect numbers it still takes a little fiddling to get it feeling good, even though that produces some gas numbers that are not perfect.

Also, re: the HP numbers. The dyno used is a "brake type" or eddy current type. Much preferred to the Dynajet accelerated drum type. It's peak HP figures are (so Dave tells me) about 10-15% lower than the Dynajet. Not that it matters much, since we're looking for changes in the values given different jetting indicated on this equipment, not a comparison to others, or of values from magazine tests, etc. 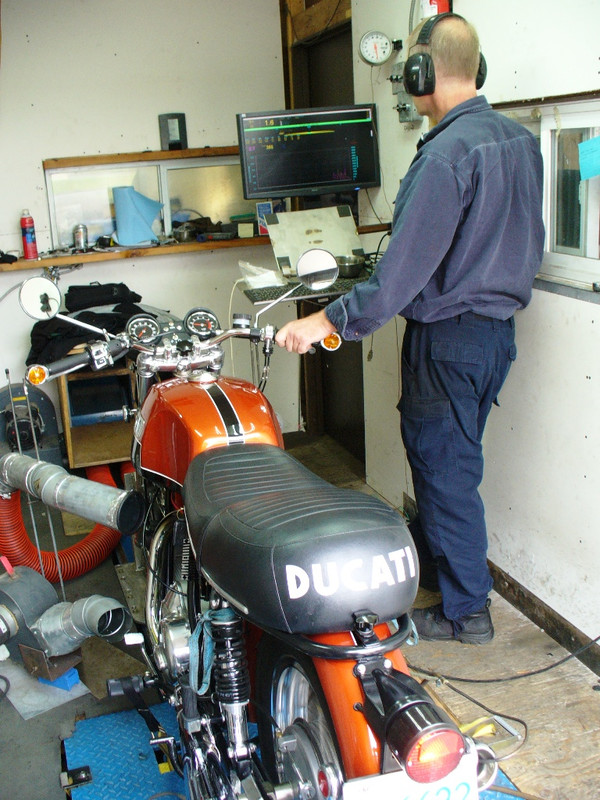 Took it out for a ride and oddly, or maybe not, even though it seemed to have a cleaner take-up from just off idle with the 60/3 slide on the dyno, when actually riding it, it's s bit blubbery like too rich ........... damn. It was better with the 70/2 slides. Looks like I'll be changing back to those and maybe play with pilot jets to see if I can get the take-up smoother. Or maybe it's going to be a little quirk to just live with.
Last edited by geodoc on Fri Dec 28, 2018 11:11 pm, edited 3 times in total.
Top

I'd disable the accelerator pump first,experimentally. Again: 60-1 w/5cc per 20 squirts will fix the bike. You probably have way more accelerator pump volume than that, it's arriving late in terms of throttle opening,and you probably really don't need any with your 30 or 32 mm carbs,which are giving you tremendous vacuum,air speed, and vaporization.
Top

Here are some dyno charts comparing different bikes tested by Cycle Magazine in 1972 which includes the Ducati 750 GT:

Re replacing the needles- Why do that,before trying the needle adjustment that is available via clip position? If my memory serves,the leaner clip positions were the way to go.Again,you have very strong vacuum and high air speed with those little carbs,so it stands to reason that it would be a bit rich on the needle at part throttle.
Top

Valve adjusting time. The rocker pin puller & centralizer makes it much easier. Lucky I was able to borrow a shim kit from Ducati tech friend Nikola.

You're welcome. What issues are we talking here?
Top

plus it's clear now that I need to contact Mr. Haerter for this & that - he appears to actually have things in stock!
Curt
Top

plus it's clear now that I need to contact Mr. Haerter for this & that - he appears to actually have things in stock!

Wolfgang is in Europe on a buying trip right now & no idea when he's coming back. He's good for odd-ball CEV, dellorto, brembo & other std. Italian cycle parts (and THE MAN for Laverda), but pretty thin on bevel twin specific.

Steve, kudos to your store site BTW. It's kept fresh, really well organized and easy to use. Having gotten all that Domiracer stuff, you ratcheted up the prospects of having odd bits that otherwise you just have to camp out on eBay hoping that somebody just happens to list a fling-pin retaining gubbin. And thanks for the fast shipping on the K5's & 65 PJ's.
Top

You have a GT? Pictures? Story?
Top

oh, it's an ongoing bitza parts-gathering project - this is the EZ part, I'm years away from a build thread.....
Curt
Top

Went with friend Ian Watson with him riding his '72 BSA Rocket Three. Ran like a freight train - no break-downs, no crashes, no roadside conversations with constable Bob and no near misses with Bambi.

Interestingly, Ian's BSA & the 750 GT were both getting almost exactly the same fuel consumption - 38 - 40 MPG (US) (6.2 - 5.9 liters / 100 km.). The GT, even after showing about the right F/A ratio on the dyno at cruise RPM in 5th, still shows a soot accumulation at the ends of the mufflers like it's running a bit rich. I dropped the needles and changed the pilot jets from 62's to 60's (slight blubber off idle that I'm still fussing around with).

Used about .3 liter of Lucas SAE 50 Motorcycle oil. BR6HS plugs looked on the rich side of in the right color range.

A bit of oil leakage out of the early style tach drive which may be just the way they are since I see no o-ring or seal in there, only a little oil slinger on the input shaft inside the gear cover. Also found oil leaking out the back from the chain / sprocket area. Shift selector shaft seal is definitely leaking, but the oil is traveling to the case/ shift selector housing joint, which does not seem possible from the shift shaft leak. May have output shaft seals leaking too. Will be replacing all three.

Felt a bit of pulse through the front brake lever again. Measured and DAMN! After I cut it to perfectly straight 2500 km ago, it's got .020" run-out. Not surprised since this happened to a Guzzi fixed iron brake of mine a few years ago. I now know that truing a warped fixed iron disc is a waste of time. Have a new disc on the way from Ian Gowanloch.

BTW - if you're in Victoria BC, make sure to stop by Wheelies Coffee, Bar & Motorcycle Shop. Great folks that gave us some local fabulous road tips and served up fantastic sandwiches: 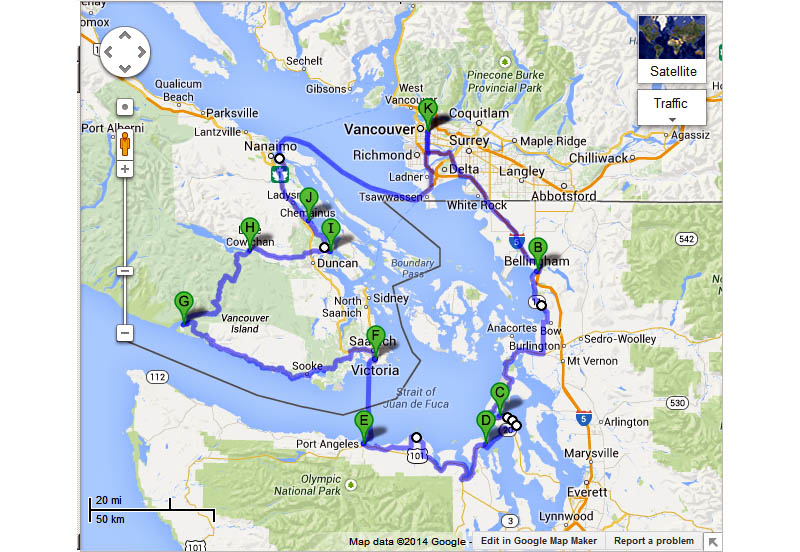 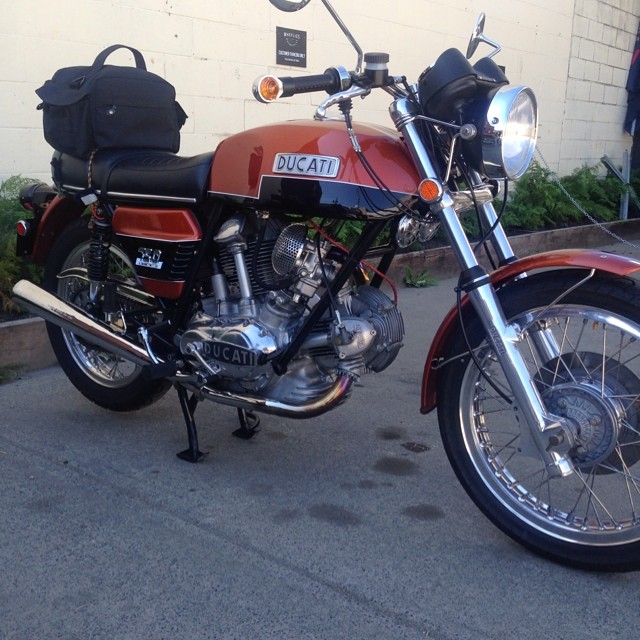 You are probably leaking at the countershaft sprocket/spacer interface. Before you go digging out the seals try undoing the sprocket, pull the spacer and apply 3Bond [Hondabond, Yamabond etc.] to both edges of the spacer and the outer edge of the sprocket and tighten the crap out of the nut. What happens is oil creeps through the splines on the output gear as they are cut behind where the bearing sits and it comes out around the spacer/sprocket interface. If oil is leaking at the output gear/mainshaft area you can tap in another seal without having to pick out the old one and that usually stops the leak there.
Top
Post Reply
153 posts