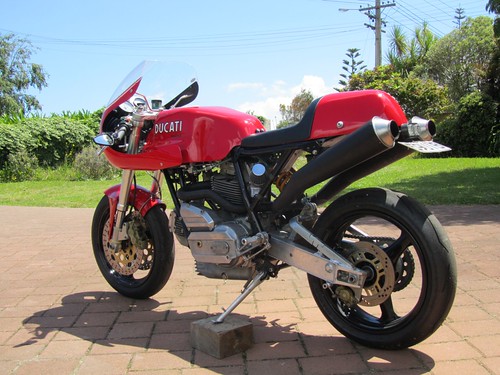 by big phil
hi mate, seems you've had over 300 views and no one say thats fucking awesome! did you rotate the engine in the frame to give the tail the jacked up look? and how did you manage to increase the off set of the chain to clear the tyre? nice bike, i love modified bikes.

by BevHevSteve
I think this is over the top kewl - my kind of bike. Mike spent a huge amount of time I'm sure putting this together....

What else have you done since posting?

by ducksandhogs
Thanks for the kind comments. I think it looks pretty cool (from most angles anyway!) but its always good to hear that others think so too. Of course, if I had a green frame 750ss, I wouldn't have done this to it! Not long after getting it to this stage I had to rebuild the motor after an ignition problem revealed a stripped sparkplug hole, which revealed imminent big end failure. So the motor now has Carrillo rods,new bearings, and because I'm getting tired of chasing missing sparks, a Sachse electronic ignition. Also, because without a centre stand, kickstarting was a pain in the leg, I re-instated the electric one (magic!). This all happened just as I was in the process of getting compliance for our road licensing regulations, but is now once again back on track. External changes since the photo (mostly for said compliance) have been the addition of a rear "hugger", extended rear tail light/number plate mount with separated indicator stalks, chain guard, and a chain tensioner built for an early HD Sportster primary chain ( there's no way that suckers going to break!). I had a 3" front rim but to ease compliance I switched to a standard Ducati 3.5". Had to have more front wheel coverage (1/3rd) with the mudguard, so it now wears one from an ST Ducati WITH an extender, which required new brake lines also.
The frame was acquired through our native on-line auction (Trade-me) already chopped at the front (I believe by Grizzly in the USA) to steepen the steering angle and braced accordingly. The "jacked-up" look is more pronounced at this angle, but is simply by lengthening the suspension. To help with chain clearance the front and rear sprockets have been upped and a "case-saver" added. It's not ideal "chain-pull" wise but we're not talking about a lot of power here. Unfortunately I've had to restrict total rear wheel travel though because of clearance issues with the mufflers. The engine sprocket off-set has been achieved by cutting a section of shoulder off the original sprocket and adding it to a new 520 version.Once again, not talking about a lot of mumbo here.
Looking forwards to finally getting it on the road, and legally....