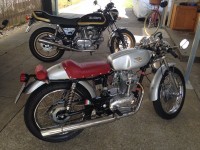 my 82 darmah has the ign light staying on, has been rewired before I bought it 2 weeks ago. also the stand idiot light shines bright with the stand down , but , dim when the stand is up. also the neutral light doesn't shine at all. have checked all the connections but not sure on checks for the alternator & regulator. I remember a long time back when doing an old bike having a problem with lighting caused by some sort of feed back/earthing problem throught the stop lights. this having new wiring doesn't seem to qualify for that..Any advise would be greatly appreciated.
Top

1. “the ign light staying on”. The idiot light is controlled by a voltmeter which registers both over and under charging. They’re not the most reliable of items and normally I would say don’t worry too much about it, except …

2. “rewired before I bought it”. By someone competent? Apparently not, given the faults you’re finding. But let's move on ...

3. “the stand idiot light shines bright with the stand down, but dim when the stand is up”
Assuming the switch is working correctly, this suggests that the circuit is getting a parasitic feed from somewhere. You‘ve got to chase that feed down methodically, using a meter. If you understand how electricity works, this isn't difficult to do, just (potentially) time-consuming. If you don’t ‘get’ electricity, better to find someone who does.

4. “not sure on checks for the alternator & regulator”
Given that 2 of your 3 faults are showing with the engine not running, don’t at this time go hunting for faults in the charging circuit. Sort the simple things first. But see * below.

* Quick charging system check.
Put a voltmeter across the battery. Start the engine and rev it to around 4,000. The voltage at the battery should rise to a maximum of 14.5 volts. If it doesn't rise at all, then the alternator and/or the reg/rec isn’t working. If it goes above 14.5 volts, the alternator is working, but the reg/rec is cooked. If it only rises slightly, that indicates a possible alternator fault (or maybe just a fully charged battery).

Thanks for the advise Craig. I have found that it is charging, I simply thought that the warning light system was like a car & go out when charging. I own 3 Ducatis you think I would know better. I am chasing the strange feed to the stand light as well as hunting a squeal in the clutch, it goes when you apply the clutch,, also slipping slightly. I will post when it is all back together..
Top
Post Reply
3 posts • Page 1 of 1