by Spub
I just picked up a 1980 Darmah SSD. It had the "Gen" and "Lights" lights burned out (confirmed by swapping out other lights). Does anyone have a resource for replacement lights? These are the colored square lights on the dash of the Darmah, MHR and Pantah, and there might be others....I tried to bid on a beat up dash on Ebay just for the lights, but it reached crazy money, so I assume there is a extremely wealthy, spendthrift MHR, Darmah or Pantah owner that has the same problem as I do, since the damn thing went for over $300...
by machten
I had similar problems and have been on the look out for them for a number of years. I tracked down some new ones at Mdina Italia in the UK and bought the last that they had about three years ago - which was a complete set other than the "Lights" one. I have picked up a few other new ones on eBay over the years (Neutral, Gen and High Beam), but never found a new "Lights". I have repaired some of mine by pulling them apart and soldering in new micro globes. The micro globes I got from a specialist light globe shop. The only tricky part of this is pulling them apart without fracturing or breaking the coloured plastic bit. One other word of warning - don't try and clean the old ones with turpentine or other solvents. It takes the lettering off (bitter experience!).

I seem to recall there was some instructions somewhere on the Internet on replacing the globes with LED's. I think it was on the old http://www.ducatimeccanica.com/ site, which seems to only work intermittently these days as it is apparently being moved to a new server.

Good luck!
by Vince
Phil at road and race had some at some stage,think yourself lucky,the dash on TL Pantahs has 8 of these including a stand light,the only one I am missing is the green nutral light,dont supose there is an Italian car with similar idiot lights out there.
by Spub
replaced all of the lights on my Darmah dash today with LED lights. Used 1 - 3mm 5000cmp clear LED and 1 450ohm resistor per light. Hard part was taking the old light apart. There is an inner white piece that holds a incandescent bulb that is soldered to two bladed terimanls. You must carefully pry this inner piece out from the colored lense that slips over it. Once you have done so you can use a soldering iron to remove the bulb that is soldered with two very fine wires to each terimal. The wires pass through two small holes on each bladed terminal, with solder holding the wire in place. Simply heat the solder and remove the wire and bulb. The LEDs come with two wire leads, however they cannot be wired directly to replace the bulb, since 12V DC would fry it. This is where the resisto comes in. You simply solder it in line on one of the LED leads (to take the place of that lead), and then solder one lead to one bladed terminal, and the end of the resistor to the other bladed terminal. Push the white inner piece back into the colored lense half, and you are done, just plug in to replace the old light.

by Craig in France
Thanks for posting this, Spub. Useful.

I have one light out at the moment, for which I fortunately have a spare; but I expect the day will surely come ...

Craig in UK/France
by Spub
If anyone is interested, I had an extra set of lights lying around so I did them up and they are now on US E-bay. Just do a search for Bevel Ducati and they will come up.

Also, when you work on the lights, do not try to work on them with the dash in place, the wires are not long enough to do this properly. Simply removing the dash and letting it dangle is also not a good idea, since the ignition key wires are really the things holding the dash in place. I broke all three ignition leads trying to do it this way (they have a "push pin" fit into the ignition switch, but the push fit seems to be stronger than the crimped wire to push pin connection - I would solder this joint, and clearn out the socket and the push pin. I think a lot of ignition cutting out problems are caused by corrosion at these joints). I know, I'm a heathen, but you don't have to be. Remove the main connector at the fuse box, and then take whole unit (dash/wiring/main connector) out.

by Greybeard
Anyone out there with 3D printer able to make them idiot lights, seem to be made from unobtanium

by ducadini
Apart from some of the lettering : the Suzuki GT 750 had the same dashboard and most of the switchgear.
MAYBE the kettle-parts are easier to find ?

by Speedrocker
Hello,
i´ve had the same problem with blown bulbs in the MHR 900 control lights,..
The challenge was, to get the insert of the light-units carefully "cracket out",..i´ve done it, by cutting around the line between insert + cover with an really sharp thin blade, than carefully with a pliers...
after that, i´ve soldering out the old fine wires from the bulb,...and soldered new LED´s ( resistor supported types) in. Works fine !!!

by Speedrocker
here is an schematic picture , example on "high beam"...picture must be turned 90° right.. 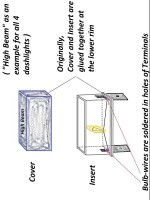 by 81mhr900ss
I just fixed my broken lights. As described earlier in this thread, the trickiest part is breaking the coloured cover from the white base; two almost fell apart others were really tricky. I bought 3mm leds that come pre-wired with resistors from Amazon, 10 of them, cheap. I simply removed the old bulb, drilled a small hole in the centre of the white base using a bradawl, just big enough to pull the led through from inside the base until the heatshrink base jammed. I cleaned the spades with a small file really close to the base, cut and exposed enough wire to wrap around the spades once then soldered them tight to the base. Next, double check which way the current goes to make the LED work then glue the coloured cover back in place with the writing the correct way up. If you screw-up it's no biggie, you will simply have to cross over the female connectors inside the console; loads of room and lots of wire length for this.

I read somewhere on the Internet where someone had done the same as me but used two LEDs per lamp; WAY too bright! One is enough.

by Speedrocker
Fine !
...Yes, of course, one is bright enough! ( The LED´s are a little more brighter than the original bulbs)
All times are UTC-07:00
Page 1 of 1